Evolu was an alien entity that first appeared in the form of cells found inside a meteor. Several of Evolu's cells were tested on animals for experimentation, each with the same catastrophic results. When a troubled scientist named Ryosuke Sanada deliberately exposed himself to the mutation in hopes of improving himself thanks to the Evolu's cells allowing its subjects to enhance their own abilities, but it conflicted with his humanity and was always causing pain to Ryosuke as a result. It would also cause him to switch between being the monster known as Evolu and the man known as Ryosuke as a result of power struggle over who was the more dominant controller of one's body.

Evolu's first presence was felt when he destroyed a lighthouse in search of electricity, but he quickly disappeared before GUTS could find the culprit behind his attacks. As Ryosuke was taking a leave to heal from his "condition," he resided at a hotel, but continued to receive heart attacks from Evolu's battle over control. One night, Evolu took control and destroyed the hotel he was residing in, but disappeared just as Ryosuke was able to gain control of himself before GUTS could arrive again. Unable to combat Evolu's influence anymore, Ryosuke revealed the truth behind his self experimentation to Evolu, feeling he was not doing adequately with his research. Finally giving in to Evolu's influence, the mutation took full control of Ryosuke's body and proceeded to attack the hotel resort, endangering thousands of people. With GUTS unable to attack him, Ultraman Tiga appeared to hold Evolu off as much as he could, knowing who Evolu was. Evolu was able to beat down Tiga by using his electrical attacks, but just as it seemed Tiga's time was up, Evolu had used up all of his own energy and so the mutant disintegrated. However, Evolu's defeat came at the cost of Ryosuke's own life as well. Requiem to the Darkness

Sometime later when Evolu cell based creature, Metamorga was rampaging, it had endangered Ryosuke's love, Sanada. With as little of what was left in him, for the one he loved Evolu returned in the form of Illusion Evolu (幻影エボリュウ Gen'ei Eboryuu) a white ghost-like figure of himself as the Evolu monster. Phantom Evolu grappled onto Metamorga and allowed Ultraman Tiga to finish off his creation with the Tiga Freezer attack. With Metamorga gone, Ryosuke and Evolu's spirit was finally put to rest. Goodbye to Darkness

While Evolu himself did not appear in Ultraman Dyna, a scientist named Hiroyuki Yamazaki used refined Evolu cells to transform himself into a monster. Due to the Evolu cells being modified, the scientist's enhanced form lacked his predecessor's ability to draw electricity.

Flashes
Add a photo to this gallery
Illusion Evolu 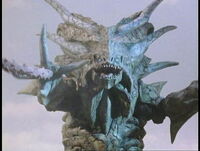 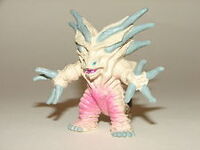 Evolu
Add a photo to this gallery
Retrieved from "https://ultra.fandom.com/wiki/Evolu?oldid=510695"
Community content is available under CC-BY-SA unless otherwise noted.