"I am not your enemy, so you have nothing to fear about."

The land of demons

Etelglar was designed by Masayuki Goto, the artist who did the illustrations for Another Genesis and the Box art for the Ultraman Zero movies, and the DVD boxes for Ultraman Mebius, Nexus and Max. Goto first design Etelgar to be a successor to Vict Lugiel, which was turned down after Koichi Sakamoto requested the character to be humanoid as opposed to monstrous. There was also an idea for one of Etelgar's arms to be deformed and form into a multitude of weapons, allude to Victory's own Ultlance. This was unable to be realized, so Etelgar's current design was put in place.

Long ago, Etelgar attacked Planet Zandt and captured one of their residents, Arena. He manipulated her memories by concealing his image as her planet's destroyer with Ultraman Ginga, thus with her, they went to various dimensions and kidnapped Heisei Ultras.

After imprisoning most of the Heisei Ultras, he proceeded to overpower and imprison Ultraman Cosmos, on Planet Juran. With Cosmos imprisoned and separated from his host, Ultimate Zero appeared and challenged Etelgar, who fled using his castle to cover his and Arena's escape. While travelling across universes, Etelgar notified his mistress of their next target, the Ultraman from the future.

When he arrived on Earth, he was challenged by Ultraman Ginga and Ultraman Victory. However, his combat skills were more than enough to avoid all of Ginga and Victory attacks. He almost succeeded in sealing the duo, but Ultraman Zero arrived for a rematch. Etelgar was strong enough to withstand Zero's Ultimate Aegis attack which only burned off the demon's scarf as well as breaking his mask.

Once again, Etelgar retreated and Ultraman Zero took the opportunity to hold a special training regimen for Hikaru and Shou. On the next day, Etelgar started making his move and collect all of the fear of the civilian population (including Hikaru and Shou) to create an Eteldummy of Dark Lugiel. After that, he escaped to his castle.

After all of the sealed Ultras were freed, all of the Ultras, save Cosmos and the newborn Ultraman Ginga Victory, the Ultras confronted their rival Eteldummies that were created by Etelgar and the duo fought Etelgar on top of his castle. Etelgar managed to hold up Cosmos' Luna Mode and Ginga Victory but had a hard time after Cosmos changed to Eclipse Mode and Ginga Victory Ultlance Shepherdon and Hyper Zetton. Cosmos was able to separate Arena and cure her with his Cosmium Beam, leaving Ginga Victory to destroy Etelgar with his Ultra Fusion Shoot once and for all. Etelgar is destroyed above Planet Earth. The other Ultras utilized the Crossover Formation and destroyed Etelgar's castle with their signature beams.

Etelgar is revived and is sent to intercept the Ultraman Rosso and Ultraman Blu. The duo try to retaliate by changing into their Wind and Ground forms respectively but are unable to do any damage because of Etelgar's strong armor. Etelgar is about to destroy them until Ribut comes, having been sent by Taro, and blocks his attack with his Ribut Blocker. He traps him with his Strong Net and they fly away, escaping him for the time being.

The League of Darkness reassembles at Ultra Dark-Killer's Dark Palace on Planet Tenebris. After Ultraman Orb Darkness is created by Dark-Killer, Etelgar took interest in Lugiel's bitter rivalry towards Ginga and simply goes along by claiming Victory as his opponent, which he does so when the New Generation Heroes storm the Dark Palace. Etelgar keeps up with Victory's Ultlance and managed to gain the upper hand before he was defeated by Ginga Victory's Wide Zero Shot, spending his final moments cursing at his defeat. Ultra Galaxy Fight: New Generation Heroes 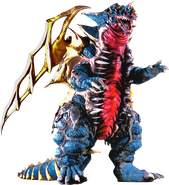 Having survived his defeat in a previous battle against Ultraman Ginga Victory, Etelgar plotted his revenge by sealing New Generation Heroes, each in different locations: Ultraman Ginga on the Moon, Victory in the Victorian kingdom, X in cyberspace, Orb on Planet O-50 and lastly Ultraman Geed in the Monster Graveyard after a short duel against Zero Beyond. The latter recruited Ultraman Rosso and Blu in order to unseal all Ultras as they fought against Etelgar. The fight ended with Etelgar defeated once more by the combined attacks, of Rosso, Blu, Geed, and Zero Beyond. Ultraman Hit Song History