―Gamu Takayama, "His Name is Gaia"

Active
Esplender (エスプレンダー Esupurendā) is Gamu Takayama's transformation item. With it, he can transform into Ultraman Gaia and fight the monsters.

After Ultraman Gaia defeated C.O.V., he turned back into Gamu. Gamu found a strange light on the battle which he sensed was important, using a photoelectron tube he had on him, he took it. Later on, he used it to transform into Gaia a second time. Gamu later built the Esplender to properly house the Gaia's force as a more suitable device. In Ultraman Gaia episode 26, Hiroya Fujimiya gave the Esplender Agul's light, transforming Gaia into Version 2. The Esplender was later drained of its power by Zog, rendering it useless. Later in the Ultraman Gaia direct-to-video special Ultraman Gaia: Gaia Again, a race of advanced undersea beings restored Gaia's force.

To transform, Gamu thrusts the Esplender forward and usually shouts "GAIA!". Before the device's construction, Gamu would use a photoelectron tube with the Gaia force to transform. 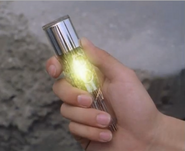 The Esplender with both the Gaia & Agul forces 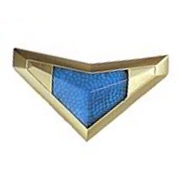 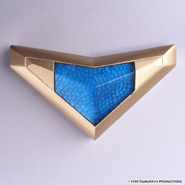