A baby Kaiju that never wanted to cause destruction, hatched underground nearby a building and destroyed it in order to make a nest, this called the attention of EYES. Musashi tried to summon Ultraman Cosmos but, refused, wondered why and found out when she tried to stand up and walk like a baby. Even EYES didn't want to hurt her but, JASDF commanded them to put her down so they start to shoot at her, which then made Cosmos come in and tried to hit down some of the missiles but, she thought that Cosmos was shooting at her so she attacked with lighting bolts. Cosmos got down on his knee's to plead he was not the one hurting her and not wanting to cause harm. Weirdly she stopped but, fell over her side and died! Cosmos went to investigate and finds an egg under it and discovers that this species only lives for a day! So the giant took the body to space and the egg was taken to EYES HQ to be taken care of. The Organism of Light 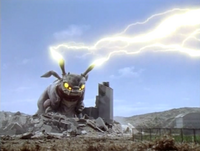