None
Enomena (エノメナ, Enomena) is an alien that appeared in the TV series, Ultraman Tiga. He appeared in episode 21.

Enomena was an alien monster that penetrated into Earth's dimension through the use of his electromagnetic waves in R distract in Japan (in the vicinity of the cities: Hakodate, Sendai, Mito, and Tokyo). While appearing in one of the four destinations at an amusement park, Enomena quickly began to spread his electromagnetic waves throughout the vicinity, causing several people to riot madly. Before GUTS could deal with Enomena however, the alien quickly teleported away before they could do any harm to him. Enomena would continue appearing in the 4 areas of R distract, spreading his waves to several people, unbeknownst to GUTS that Enomena was also chasing after a group of traveling clowns and their mascot, Deban, as Deban possessed a cure to his insanity waves. As Enomena appeared before the group and tried to kill them one night, GUTS was quick to arrive again to try and stop the alien. But again Enomena teleported away before GUTS could do anymore harm.

Enomena then appeared the next day in Tokyo, this time assaulting the city with both his waves and his light bullets, angrily searching for Deban to try and kill him. Once Deban exposed himself in order to cure the populace with his own electromagnetic waves, Enomena discovered the tiny monster and attacked him with his light bullet attack. These actions provoked Daigo into transforming into Ultraman Tiga to battle the alien himself, however Enomena quickly began to coat Tiga with his insanity waves. Luckily, Deban was still alive after being blasted by Enomena and used his antidote waves to cure Tiga from going insane from the waves, but at the supposed cost of Deban's life as well. Angered by Enomena's actions, Tiga transformed into his Power Type and was able to overpower Enomena in battle. Despite using several tricks to combat the Ultra, Enomena's waves and light bullet attacks were disabled and Enomena himself was destroyed by Tiga's Delacium Light Stream. 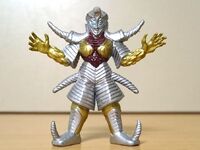 Enomena minifigure statue
Add a photo to this gallery 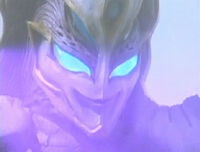 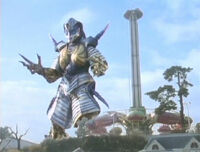 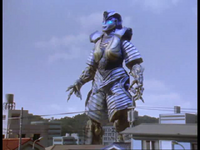 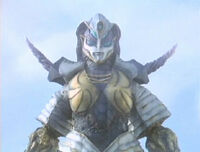 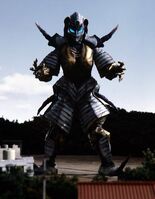 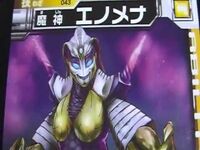 Add a photo to this gallery
Retrieved from "https://ultra.fandom.com/wiki/Enomena?oldid=510678"
Community content is available under CC-BY-SA unless otherwise noted.