Enmargo (エンマーゴ Enmāgo)[1] was an oni Kaiju that appeared in episode 14 of the series Ultraman Taro.

Enmargo was an ancient demon that was buried deep inside a mountain for centuries until a construction crew began waking the giant creature from its hibernation with their explosives, causing an earthquake. When ZAT came to investigate the quake, the owners of the land refused to stop construction, despite the possibility of a giant monster. After ZAT left, blasting continued, dislodging a statue of an ancient deity from the mountain that was keeping the demon warrior buried, which began sending psychic signals to children that had found it earlier to return it to the mountain. However, soon enough, the massive Enmargo fully awakened from its hibernation and went on a rampage throughout the construction site. ZAT received word and began their attack on the ancient sword-wielding monster. However, the group's weapons were powerless against the ancient demon's power. After destroying their fighters, the titan began destroying the surrounding forest while Kentaro and the children attempted to return the statue to the mountain in hopes of stopping the giant. Meanwhile, ZAT continued to fire everything they had into Enmargo but nothing worked. Finally, Kotaro summoned the mighty Ultraman Taro to duel the evil giant. However, he found the creature's shield too strong for even the Strium Beam to pierce and the Ultra warrior was kept on the defensive against Enmargo's sword. However, the statue used its powers to trick Enmargo into thinking he'd beheaded Taro, only for the oni itself to be beheaded. The oni refused to die completely, but was left vulnerable, allowing Taro to fire the Strium Beam and kill the ancient terror once and for all.

Prior to Enmargo's debut. Enmargo was summoned by a villain known as Juda to get Taro occupied with the oni while Ultraman, Zoffy, Ultraseven, Ultraman Jack, and Ultraman Ace fought against Juda's robotic creation, Grand King. Ultraman Story

Enmargo reappeared in episode 10 of the series Ultraman Orb as a Kaiju Card used by Jugglus Juggler in a Tarot card fortunetelling with Alien Nackle Nagus. Enmargo's card represent death, which is Nagus' impending doom as he died in the same episode by Juggler's Katana. 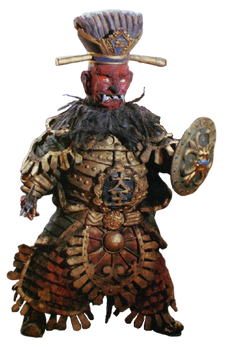 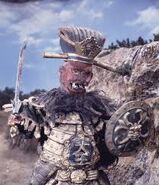 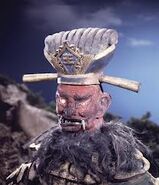 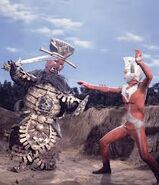 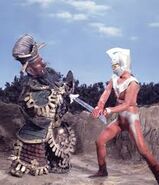 Figure of Enmargo, created by Buta no Hana. 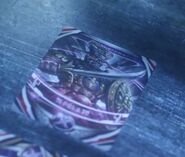 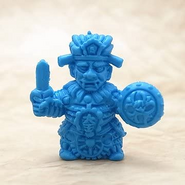