"You're very important to the Earth. I want you to keep fighting for the Earth. So...So...So...I don't regret it at all."

―Emi Jouno to Takeshi Yamato, "The Female Warrior of Ultra"

Eri Ishida
Emi Jouno (城野エミ Jōno Emi) was the only female member of UGM. She sacrificed herself to save Takeshi Yamato from the Alien Galagala.

Emi joined UGM after training and often made mistakes such as bringing in an alien from a mission (as revealed in the Argon episode). She insisted on Ryoko Hoshi taking her place in UGM before she died.

Before 80 and Yullian returned to the Land of Light, UGM's science division revealed an android that they had been working on in secret that looked just like Emi. Takeshi Yamato and Ryoko Hoshi said their goodbyes to her, and then retired from UGM and return to their homeworld Nebula M78 as their true forms Ultraman 80 and Yullian. 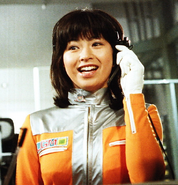 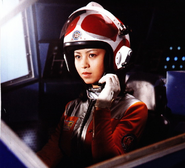 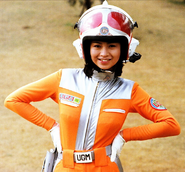 Emi saying goodbye to Takeshi before her death