"Cosmos, it looks like you have changed the monster for the human beings interest. Can you really tell what makes us so different?"

A long time ago, Team EYES had to face Eligal, a monster that can emit poison from it’s mouth and twin gas tubes on its back. However, they failed as the monster was too fierce and Hiura had no choice but to kill the monster.

Another Eligal resurfaces sometime later in Area K where it wanders off but the monster seems unwell. Team EYES dispatched again to catch the monster by clogging Eligal’s Poison Gas tubes on it’s back with freeze bombs. Fubuki later fires the anesthesia missile, but the monster rampages so much that the Chaos Header reaction appears on it’s neck. It was revealed that Eligal was trying to fight the Chaos Header influence but with the anesthesia missile used on the monster, it became weak. Chaos Header then uses this chance to gain control of the monster. Musashi tries to get closer and fired into the monster’s mouth but failed - he survives by transforming into Cosmos before his jet hit the ground. Cosmos tried to expel Chaos Header but failed as Eligal too can resist Cosmos’ Luna Extract technique. Chaos Header had gained a small control of the monster and attacked Cosmos. Still not giving up, the giant becomes Corona Mode and fought Eligal. Cosmos managed to expel Chaos Header from Eligal but the entity then created a duplicate of Eligal called Chaos Eligal to fought Cosmos. Despite Cosmos’s victory against Chaos Eligal, the original faints from exhaustion and dies. Strength and Power

Another Chaos Eligal reappears at K9 Point and heads towards a village. Musashi appears and transforms into Ultraman Cosmos to fight and used up all of his power to purify the monster via Luna Extract. However, in a twisted turn by Chaos Header, the Luna Extract was absorbed, with the Eligal that was possessed eventually devoured and turned into Chaos Header Mebut. Dreaming Courage

Another Eligal would find itself transformed into a minion of chaos months later in the forests of Japan. After a battle with the hero, where Chaos Eligal pulled out all of its powers, the guardian managed to hit the monster with the Cosmium Beam, forcing the evil out of its body and changed its tissue structures so that it won't emit poisonous gas. Chaos Header then appeared and revealed its true intentions: to draw Ultraman Cosmos away from EYES base. Chaos' Violent Attack

Several Eligals are seen with other monsters on Planet Juran. Ultraman Saga 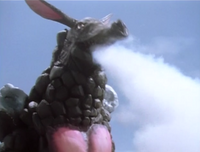 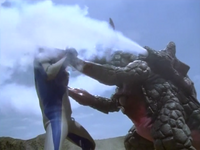 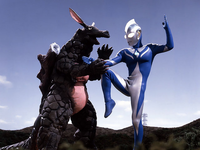 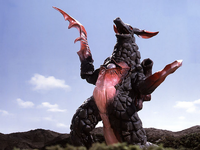 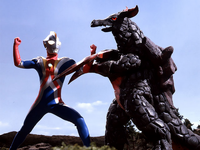 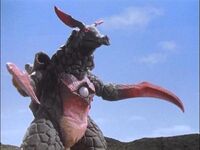