Mirrorman episode 51 "Farewell Mirrorman"
Eletrikzaurus (エレキザウルス Erekizaurusu) is a Kaiju that appeared in the series, Mirrorman.

The Invaders decided to collide their homeworld of Planet X with the Earth, knowing it was twice as big and four times the gravity and could steal its atmosphere upon collision. Ten and a half days before the collision would occur, the SGM constructed an anti-gravity apparatus at the foot of Mount Fuji that could use minus gravity to propel Planet X away. Jumbo Phoenix had to be sent in after a monster was detected on radar, however it and the crew were quickly captured by the Invaders using one of their space ships. Murakami, Fujimoto, and Yasuda were soon possessed by Invaders and took the Jumbo Phoenix back to the SGM base. The next day the apparatus was completed, the air force patrolled around mankind's only hope. The possessed trio set bombs around the base after immobilizing Asako and Yuki followed by taking off in the Jumbo Phoenix. Dr. Mitari confronted them as they told him their plan.

The detected monster, Eletrikzaurus, made his way to the apparatus when Mirrorman appeared to fight him. With a few chops and a throw Eletrikzaurus was badly beaten down. However, the possessed Jumbo Phoenix crew opened fire on Mirrorman, allowing Eletrikzaurus to stand up. Eletrikzaurus was quickly met by the air and began to shoot their jets down. Mirrorman wasted no time by dragging the alien monster's tail, pulling him to the ground, only to receive an electric shock. Both hands detached and locked onto the hero's neck. Mirrorman pried himself loose and used the Mirror Knife to destroy both horns on Eletrikzaurus's head. Mirrorman then quickly grabbed the Jumbo Phoenix and used his Mirror Fire to exorcise the Invaders from Murakami, Fujimoto, and Yasuda. Eletrikzaurus barely got up only for Mirrorman to assault him without haste until the alien monster was forced to burrow away from the fight.

Eletrikzaurus returned when the apparatus was repaired and Planet X was three hours away from crashing into Earth, this time with Dead King assisting him. The Jumbo Phoenix managed to knock down both monsters with a missile barrage only to be met by the Invader armada. This allowed Eletrikzaurus to get up and launch his claws at SGM. Just as he and Dead King continued their march, Kyotaro turned into Mirrorman using his pendant for the final battle. Eletrikzaurus was shoved back followed by Dead King being grabbed by the tail and thrown into him. Eletrikzaurus used his claws to hold Mirrorman in place while Dead King based him with his tail until SGM used their missiles to knock the latter down. The hero used the Slicer V to free himself and decapitated Eletrikzaurus with the Miracle Kick. 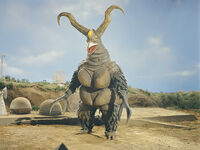 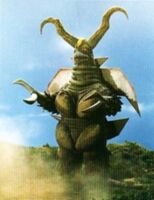 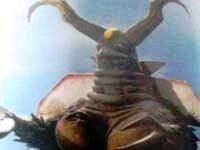 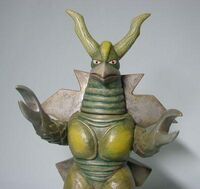 Add a photo to this gallery
Retrieved from "https://ultra.fandom.com/wiki/Eletrikzaurus?oldid=538644"
Community content is available under CC-BY-SA unless otherwise noted.