Return of Ultraman episode 15 "Revenge of the Monster Lad"

Eledortus (エレドータス Eredōtasu) was a turtle-like Kaiju with similar powers to that of Neronga. He only appeared in the TV series, Return of Ultraman in episode 15.

The Kaiju first made his presence known appearing near a power plant invisible but a young boy, Kato Susumu, finds Eldedortus but mistakes it for Neronga. Jiro asks for the boy's notebook which contains cheats to his homeowork and has drawings of the kaiju. After Jiro being caught cheating Hideki Go gave it back to Kato's mother and Go got slightly suspicious of Kato. After confronting him, he found another friend of his bound and gagged in a car, he was the real Kato and the faker was actually named Shiro. They soon went searching for him. After learning more about the troubled Shiro's life, he began believing more strongly there was connection between him and the recent events. Eledortus soon reappeared at the railroad and destroyed a train with his heat beam before vanishing again. As MAT investigated, Go caught a glimpse of Shiro, running away from the scene. Go decided it may be good to show Shiro some kindness. He then discovered Shiro had a dislike of MAT for the manner in which they dealt with monsters. But he also discovered a toy of the Kaiju in Shiro’s home. However, Eledortus suddenly appeared in the middle of a railroad area and began to consume electricity from the power lines nearby. As the Kaiju tore through the area, MAT tried to attack it, but the massive Kaiju merely ignored their assaults and tore through the nearby industrial area, destroying all in his path. Shiro, not wanting his friend to be destroyed, came and tried to calm him down but the Kaiju merely kept attacking and ignited a huge inferno. The monster then even attacked Shiro, blasting the area near him with his energy ray. Go soon charged in, attacking with his pistol and being knocked down and pinned under the rubble of a train. Realizing his host was in danger, Ultraman Jack switched places with Go and assaulted the kaiju, only to be toppled to the ground by a beam of energy from his tail. He managed to force the Kaiju down but was forced back by electricity from the monster's body, preventing him from getting close to attack as his timer started blinking. He tried a jumping attack but was blocked by its shell, then blasted down by his tail beam again. MAT distracted the massive beast, giving Jack the chance to kill the Eledortus with his Spacium Beam, blowing him to pieces. 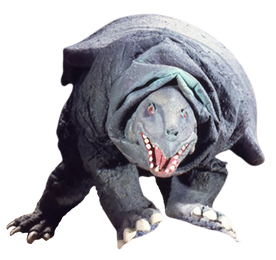 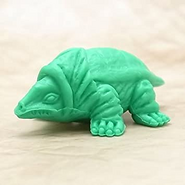 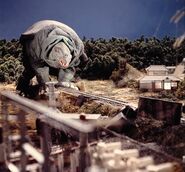 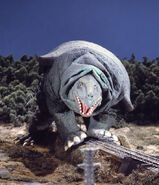 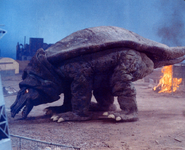