Tsuburaya described his childhood as filled with "mixed emotions." Eiji was born in Sukugawa, Fukushima on July 7th, which coincidentally fell on the same day of the Japanese holiday, Tanabata. He was the first son of Isamu Shiraishi and Sei Tsuburaya, with a large extended family. His mother died when he was only three and his father moved to China for the family business. Eiji was raised by his barely older uncle, Ichiro, and his paternal grandmother, Natsu. He attended elementary school at the Sukagawa Choritsu Dai'ichi Jinjo Koutou Shogakko beginning in 1908, and two years later, he took up the hobby of building model airplanes, due to the sensational success of Japanese aviators, an interest he would retain for the rest of his life.

In 1915, at the age of 14, he graduated the equivalent of High School, and begged his family to let him enroll in the Nippon Flying school at Haneda. After the school was closed on account of the accidental death of its founder, Seitaro Tamai, in 1917, Tsuburaya attended trade school. He became quite successful in the research and development department of the Utsumi toy company, but a chance meeting at a company party in 1919, set the course for his destiny—he was offered a job by director Yoshiro Edamasa, a job that would train him to be a motion picture cameraman.

While the Tsuburaya family's traditional religion was Nichiren Buddhism, Tsuburaya converted to Roman Catholicism in his later years (his wife had already been a practicing Roman Catholic).

In 1919, his first job in the film industry was as an assistant cinematographer at the Nippon Katsudou Shashin Kabushiki-kaisha (Nippon Cinematograph Company or Kokkatsu for short) in Kyoto, which later became better known as Nikkatsu. After serving as a member of the correspondence staff to the military from 1921 to 1923, he joined Ogasaware Productions. He was head cameraman on Hunchback of Enmeiin (Enmeiin no Semushiotoko), and served as assistant cameraman on Teinosuke Kinugasa's ground-breaking 1925 film, Kurutta Ippeiji (A Page of Madness).

He joined Shochiku Kyoto Studios in 1926 and became full-time cameraman there in 1927. He began using and creating innovative filming techniques during this period, including the first use of a camera crane in Japanese film. In the 1930 film Chohichiro Matsudaira, he created a film illusion by super-imposition. Thus began the work for which he would become known—special visual effects.

1930 was also the year of his marriage to Masano Araki. Hajime, the first of their three sons, was born a year later. During the 1930s, he moved between a number of studios and became known for his meticulous work. It was during this period that he saw a film that would point towards his future career. After his international success with Godzilla in 1954, he said, "When I worked for Nikkatsu Studios, King Kong came to Kyoto and I never forgot that movie. I thought to myself, I will someday make a monster movie like that."

In 1938 he became head of Special Visual Techniques at Toho Tokyo Studios, setting up an independent special effects department in 1939. He expanded his technique greatly during this period and earned several awards, but did not stay long at Toho.

During the war years (the Second Sino-Japanese war and World War II) he directed a number of propaganda films and produced their special effects for Toho's Educational Film Research Division created by decree of the imperial government. Those include Kōdō Nippon (The Imperial Way of Japan) (1938), Kaigun Bakugeki-tai (Naval Bomber Squadron) (1940), The Burning Sky (Moyuru ōzora) (1940), Hawai Mare oki kaisen (The War at Sea from Hawaii to Malaya) (1942), Decisive Battle in the Skies (Kessen-no Ōzara-e) (1943) and Kato hayabusa sento-tai (1944). According to legend, Tsuburaya's work on The War at Sea... was so impressive that General MacArthur's film unit is said to have sold footage of the film to Frank Capra for use in Movietone newsreels as actual footage of the attack on Pearl Harbor.

During the Occupation of Japan following the war, Tsuburaya's wartime association with such propaganda films proved a hindrance to his finding work for some time. He went freelance with his own production company, Tsuburaya Visual Effects Research (working on films for other studios), until he returned to Toho in the early 1950s.

As head of Toho's Visual Effects Department (which was known as the "Special Arts Department" until 1961), that he established in 1939, he supervised around an average of sixty craftsmen, technicians and cameramen. It was here that he became part of the team, along with director Ishirō Honda and producer Tomoyuki Tanaka, that created the first Godzilla film in 1954, and were dubbed by Toho's advertising department as "The Golden Trio".

For his work in Godzilla, Tsuburaya won his first "Film Technique Award". In contrast to the stop motion technique most famously used Willis O'Brien to create the 1933 King Kong, Tsuburaya used a man in a rubber suit to create his giant monster effects. This technique, now most closely associated with Japanese kaiju or monster movies, has come to be called suitmation (originated in the Japanese fan press during the 1980s). Through intense lighting and high-speed filming, Tsuburaya was able to add to the realism of the effects by giving them a slightly slower, ponderous weightiness. This technique, using detailed miniatures with men-in-monster-suits, is still being used today (but combined with CGI techniques as well) and is now considered a traditional Japanese craft art.

The tremendous success of Godzilla led Toho to produce a series science fiction films, films introducing new monsters, and further films involving the Godzilla character itself. The most critically and popularly successful of these films were those involving the team of Tsuburaya, Honda and Tanaka, along with the fourth member of the Godzilla team, composer Akira Ifukube. Tsuburaya continued producing the special effects for non-kaiju films like The H-Man (1958), and The Last War (1961), and won another Japanese Movie Technique Award for his work in the 1957 science-fiction film The Mysterians. He also won another award in 1959 for the creation of the "Toho Versatile System", an optical printer for widescreen pictures, which he built in-house and first used on The Three Treasures in 1959 (Tsuburaya was continually frustrated by the poor state of equipment he was forced to use, and Toho's money-pinching that prevented the acquisition of new motion picture technologies).

A loyal company man, Tsuburaya continued to work at Toho Studios until his death in 1970.

In 1963 Tsuburaya started his own special effects laboratory, and later that year founded Tsuburaya Productions. In 1966 alone, his company aired the first 'monster' series for television, Ultra Q beginning in January. He followed it with the highly popular Ultraman in July, and premiered a comedy-monster series, Booska, the Friendly Beast in November. Ultraman became the first live-action Japanese television series to be exported around the world, and spawned the Ultraman Series which continues to this day.

Tsuburaya Productions remained in good relations with Toho, and the two film studios would collaborate on films, the most famous of these collaborations being Daigoro vs Goliath.

In January 25, 1970, he died after being diagnosed with angina pectoris disease. His age at that time was 68. Sadly at that same time, he was planning for creating two movies, namely "Japan Airplane Guy" and "Moon Princess". His funeral was held in February 2, where among the attendees were Masumi Fujimoto, Vice President of Toho studio.

In January 30, 1970, five days right after his death, he was awarded the "Order of the Sacred Treasure" reward from Japanese government. Due to his death, in March 1 of said year, Toho studio abolished the Special Technology division. The Tsuburaya Production would later be left in charge to his eldest son, Hajime Tsuburaya.

In Ultraman Tiga episode 49, "The Ultra Star", Daigo attempted to pursue an alien, who teleported them both to 1965. Here it was revealed that Eiji Tsuburaya had met Ultraman during a sleepless night and the Ultra had given Eiji the Ultra Star as a token for their friendship. Soon after discovering the location of Yanakargie, Charija broke the seal placed by Ultraman, causing Daigo to become Tiga. However, he could not defeat the kaiju alone, causing Eiji to summon Ultraman to his aid. This episode was created as a commemorate for him.

In July 7, 2015, Google celebrated his 114th birthday by creating a mini game Google Doodle, where players would help him in his studio in filming a scene for the Ultraman-like hero fighting against several Kaiju. 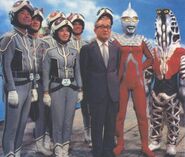 Eiji Tsuburaya overseeing the production of the first Ultraman series