Shigeru Ushiyama (Motion Comic),
D.C. Douglas (English dub)
In the 2011 manga ULTRAMAN, it is revealed that the Zettonian race has all but been wiped out during their prior attempt to invade the planet by Ultraman. The last known Zettonian, is an individual apparently named Edo (エド, Edo) who introduces himself as Ai-De, he now works with the SSSP on behalf of the Universal Alliance Council.

The self-proclaimed last Alien Zetton, Edo first appears to Shinjiro Hayata after his battle with Bemular sitting next to Ide as they looked at the bed ridden boy. Later in a secure room with Ide present, Edo explains his origins, the Alliance and what his father's work entailed. He then asked the boy to take his father's place as the next 'Ultraman'.

In the present day Edo is the head of the SSSP instead of Ide, who seems to act more as his assistant than anything else. He most likely gained this position as part of the for the Earth joining the Universal Alliance. Moroboshi is also seen reporting to him about his investigation and requesting his approval to begin an extermination operation. It was during said extermination operation that he requested the Shinjiro defeat the alien. Later when the alien and Shinjiro's fight was determined to be heading downtown into a crowded area, Edo declared to Moroboshi that humans should learn about the existence of aliens on Earth and that it was one of their goals.

Later on in the battle both he and Ide watched Shinjiro's declaration and turned to Ide, giving him the signal to call the boy and end the battle.

Searching for the Organization

Some time after the battle Edo was presented with Ide's findings from examaning Adacic's victims who appeared to young men and woman and even children. They had been barcoded on the back of their necks and the two came to the conclusion there was a criminal organization behind this.

Edo later held a conversation with Ide and Shin about Shinjiro's mental well being and also about Bemular. Shin noted that the alien was clearly not serious and could have killed him at leisure causing the group to wonder about his motives.

Edo later listened with Ide and Moroboshi as they listened into Endo and Kurata's attempt to bait the alien serial killer. While Moroboshi called them foolish, Edo commented and the policemen's tactics, given their choice of location. To the surprise of the other two, Edo ordered Moroboshi to go and back up the two officers.

Edo later hired Jack and Red to appear and cause a ruckus in the city, leading to Shinjiro coming to face the alien. The goal of this scheme was to force Shinjiro to choose to be Ultraman, otherwise his father would force a shut down of the Ultraman project.

Edo speaks with Shinjiro Hayata after he reawakens in the SSSP base after his fight with Bemular, introducing himself as the last of the Alien Zetton, who once tried to invade Earth and kill Ultraman. He is later joined by Mitsuhiro Ide and they explain to Shinjiro that the Earth had made peace with aliens by signing a deal with the Star Cluster Alliance, though there were still alien threats on the Earth other than Bemular. Being Ultraman Isn't Bad Later, Edo and the other SSSP heads got Jack to set up Black King to fight Shinjiro in public, wanting to forcefully develop his powers. The Curse of Ultraman The plan was a success and Shinjiro learned that he could fly. Edo later told Ide that Alien Igaru's communicator was stolen and used by someone else, shocking him. Hidden Thoughts Edo was surprised to see Seiji Hokuto in the new Ultraman suit, who had just dealt with the monster that they tasked Shinjiro with defeating. Nice To Meet You, Brother Edo and Moroboshi watched Ide interviewing Seiji after he was brought in by Shinjiro and Moroboshi. He came up with a plan to track him down to find his benefactor. Star Cluster Alliance As a result of the previous altercation with the SSSP, Edo informs Seiji that his admission to the SSSP has been postponed. He also gives Seiji the location of Ace Killer, who he knows brought down the plane 12 years ago. After Seiji gets his weaponized arm back, Edo pays Yapool a visit, though Edo's presence scares him. Edo gives Seiji his location as a way of "apologizing" for postponing his admission to the SSSP. However, it was a trap because Ace Killer and his men were waiting for him instead. Ace Killer Edo comes back just in time to see Shinjiro release the Limiter under his own power against Ace Killer, and is brought to tears when he sees Shinjiro fire the Spacium Ray. A Real Ultraman

Edo in Human Form
Add a photo to this gallery 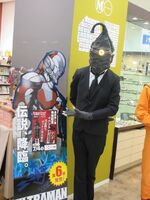 A costume of Edo presented during the promotion of ULTRAMAN manga.

Retrieved from "https://ultra.fandom.com/wiki/Edo?oldid=510657"
Community content is available under CC-BY-SA unless otherwise noted.