The aim of the operation is not to destroy monsters, but rather to find a place where they can live peacefully on Earth. Once a monster is healed by Cosmos, members will transport it to a conservation area where they may live peacefully without the threat of humans or the Chaos Header.

Here's the list of the original and new members of the Team EYES.

Here are the original members of the Team EYES. All of them except Fubuki retired 3 years later while assuming their own jobs.

Harumitsu Hiura (ヒウラ ハルミツ Hiura Harumitsu) is the main captain and leader of EYES. Aged 33 years old, he is one of the founders of the SRC research project. He is also called "Cap" just like "Cap" Muramatsu. He was also the one who recruits Musashi into joining the team. Hiura also the only one in team EYES to suspect the relation of Musashi and Ultraman Cosmos as well as both of them being the same person.

In Ultraman Cosmos Vs Ultraman Justice: The Final Battle, he retires and assumes the role of technical officer in SRC.

Mizuki Shinobu (ミズキ シノブ Shinobu Mizuki) is the vice-captain of Team EYES, 28 years old. Mizuki is one of the original defense instructors and joined Team EYES after sympathizing with their policies and ideals. While she is generally reserved, she often takes the lead in battle and guides her team through dangerous situations with great care and experience.

In Ultraman Cosmos Vs Ultraman Justice: The Final Battle, she retires and assumes the return to her previous job as a military instructor.

Koji Doigaki (ドイガキ コウジ Doigaki Koji) is the 25-year-old mechanic of Team EYES and seen as the most naive member of the team. He hails from Kochi Prefecture, which leads his teammates to often think of him as a country boy because of this. He was called a genius scientist at a young age and was watched closely by the SRC project. Koji joined the team so he could escape his father, a man who he shares an uneasy relationship with. He also had a crush on Yukari Yoshii, his friend in the college whom the Team EYES seems to be aware of.

In Ultraman Cosmos Vs Ultraman Justice: The Final Battle, Koji retires and assumes the role of chief in SRC Science Section.

A 19-year-old member of the team and the youngest member, younger than Musashi by 10 months, Ayano Morimoto (モリモト アヤノ Morimoto Ayano) (Ayano Haruno in Ultraman Saga) is very spirited and often spoiled due to her upbringing. She has a habit of falling in love with handsome men and doesn't concern herself with femininity as this is also a weakness which led her into being hypnotized by Alien Migelon in episode 19 of Ultraman Cosmos.

In Ultraman Cosmos Vs Ultraman Justice: The Final Battle, Ayano became an employee of the monster protected area while also having learned to befriend Lidorias, Musashi's pet/friend. In the film Ultraman Saga, she is married to Musashi, and they have a son named Sora Haruno while residing at Planet Juran.

Keisuke Fubuki (フブキ ケイスケ Fubuki Keisuke) is a 23-year-old former police officer and the rookie member of EYES before Musashi. He has a cool, yet slightly aggressive personality that SRC initially did not want on their Team EYES project. He often comes into conflict with other members on how to deal with the corrupted monsters, especially butting heads with Musashi many times while sharing rivalries with him though however they did become friends in the end. During Gelworm and Sydevakter crisis, he receives a help from Kasumi Sanjoji, a playful student from the university they meet as they did share some relationship.

In Ultraman Cosmos Vs Ultraman Justice: The Final Battle, he became the Captain of New Team EYES.

Musashi Haruno (春野ムサシ Haruno Musashi) is a 19-year-old pilot candidate part of the SRC Space Development Center. Musashi first encountered Ultraman Cosmos as a child and formed a bond with him that would return to aid him as an adult. In the film Ultraman Saga, he is married to Ayano, and they have a son named Sora Haruno.

In Ultraman Cosmos Vs Ultraman Justice: The Final Battle, New Team EYES are members formed by Keisuke Fubuki (now Captain) and his 4 teammates.

Since 2001, Team EYES' headquarters/air-crafts has been released. 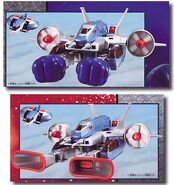 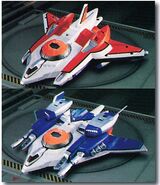 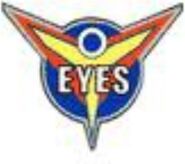 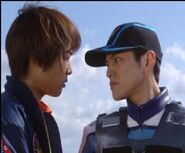