EGIS was founded by Kana Sasaki after she had left the police's External Affairs Division X. Their most frequent clients include the police themselves, and other aliens who turn to them for help.

Kana Sasaki (佐々木 カナ Sasaki Kana) is the 38 year-old president of EGIS, who previously worked as a police officer in External Affairs Division X (外事X課 Gaiji Ekkusu-ka) before leaving her job to establish EGIS. She puts up a rather playful facade but shows a serious attitude when handling an alien cases and is observant of her workers.

Hiroyuki Kudo (工藤ヒロユキ Kudō Hiroyuki) is the human host of Ultraman Taiga, Ultraman Titas, and Ultraman Fuma, who has a kind personality and strong sense of justice.

Homare Soya (宗谷ホマレ Sōya Homare) is a 25-year-old alien member with a sense of justice and is faithful to any given mission.

He is Hiroyuki's senior and is often angered when Hiroyuki runs off on important missions. As he often takes on dangerous tasks, Homare puts his high physicality to use while partnering with Hiroyuki.

Pirika Asahikawa (旭川 ピリカ Asahikawa Pirika) is a 23-year-old android operator of the private security organization EGIS. Pirika is in charge of the cyber-security affairs and other related matters, and is mostly seen operating computers at her dedicated desk, providing technical support to her colleagues Hiroyuki and Homare.

When not assuming the role of EGIS' cyber genius, Pirika can be seen having girlish discussions about diet and fashion with Kana.

Maguma (マグマ, Maguma) is an Alien Magma joined EGIS in episode 25. He currently works as the guard of EGIS.

Markind (マーキンド Mākindo) is an Alien Markind that joined EGIS in episode 25. He currently works as the accountant of EGIS.

Ultraman Taiga (ウルトラマンタイガ Urutoraman Taiga) is a member of the Tri-Squad. He has a strong sense of justice and is very enthusiastic. Although he is still young and not skilled, he is dedicated to fighting for peace on Earth. Together with Hiroyuki, he grows to become a true Ultraman.[3] In Ultraman Taiga The Movie: New Generation Climax, the Tri-Squad became the spokespeople for EGIS.

Ultraman Titas (ウルトラマンタイタス Urutoraman Taitasu) is a member of the Tri-Squad. He is a warrior and a sage from Planet U40. With his carefully trained body and healthy spirit, he is skilled in heavyweight battles.[3] In Ultraman Taiga The Movie: New Generation Climax, the Tri-Squad became the spokespeople for EGIS.

Ultraman Fuma (ウルトラマン Urutoraman Fūma) is a member of the Tri-Squad. He has quick reflexes and various techniques that make him strong in battles that require speed. He has a rough personality, but also a strong sense of duty.[3] In Ultraman Taiga The Movie: New Generation Climax, the Tri-Squad became the spokespeople for EGIS.

Osamu Tasaki (田崎修 Tasaki Osamu) is a temporary recruit of EGIS. He joined after Zetton hurt his mother. He left by the end of episode 21 to take care of his mother. 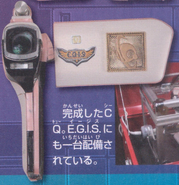 The initial EGIS before Momoka was replaced by Ayuri Yoshinaga