Mirrorman episode 25 "The Monster That Dwells in the Fairy"

Dustpan (ダストパン Dasutopan) is a Kaiju that first appeared in the series Mirrorman. He later appeared in the Thai movie The 6 Ultra Brothers vs. The Monster Army, where Hanuman brutally kills him.

Dustpan was composed of four Invaders that used a series of big vermin called Haebuns, Gokiburas, and Mothgojiras to destroy the Earth's supply of grain and spread diseases. After Kyotaro found their base the four Invaders merged thanks to a beam from an Invader space ship, forming its monster form. Kyotaro used the reflection off of a necklace from a small psychic girl named Sumire to become Mirrorman. The hero landed many punches although the giant butterfly managed to force him away with its tail. Mirrorman used his Mirror Knife to sever its wings while SGM arrives to the Invader base. The fight went on with neither having an upper hand on the other, Dustpan eventually using its antennae laser beams to keep Mirrorman away from it. Mirrorman soon finished the fight with the Slicer H severing its antennae and the Silver Cross to kill it. The Monster That Dwells in the Fairy

Some scientists were going to launch missile strikes to the sky to break the drought that was worldwide and release rain. A first missile was sent, and was successful. However, the second missile was a failure, and it blew up, causing a chain reaction with the other missiles, thus awakening many monsters: Gomora, Tyrant, Astromons, Dorobon, and Dustpan. Hanuman faced them as they were destroying the base, however, he was starting to get beaten up and couldn't keep fighting, but suddenly the Ultra Brothers arrive and clash against the monster army. After the great battle, Hanuman uses his trident and releases a bolt of energy (similar the Ultra Slash) that cuts both him and Astromons limb-to-limb. They were still alive running around hopelessly, until they crashed and they blew up, bringing the monster to his end. The 6 Ultra Brothers vs. The Monster Army 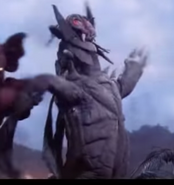 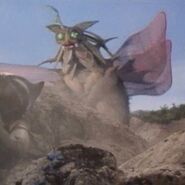