One day Mad Go-Ne sent a small group of Alien Gross down to a junkyard to steal discarded cars via remote control and cause a series of traffic accidents with them. PAT was alerted to this and investigated what was occurring. Naoki was driving around soon spotting the convey and was then attacked by the Alien Gross drives. He managed to escape and got to his plane where Naoki took off. Mad Go-Ne eventually sent the squad down and had them merged with a dump truck to become a gigantic robot named Dump Kong. Mad Go-Ne ordered Dump Kong to attack the nearby city, casually having it march down and kick everything in its path. PAT spotted it after a wheel was used to destroy a bridge and opened fire. Dump Kong was knocked down and ejected the dump container on its back to stand once more. Naoki used his plane to summon Jumborg Ace to fight the robot monster. The hero outmaneuvered and overpowered Dump Kong until the robot monster launched its arm hook to catch him and blind him with the searchlights on his breastplate. The hero used the Jumborg Saber to cut the hook's chain and separated Dump Kong back into the Alien Gross squad and a dump truck with the Emerald Hurricane. 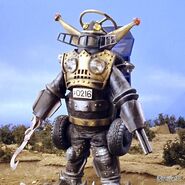