TBA
An Ultra that appeared in the Story 0 manga, he was the teacher of Leo and Astra.

Like all the Ultras of his generation, Drew was born a humanoid on the planet that came to be called the Land of Light. Like the rest of his people he was mutated into a giant being with fantastic powers and obviously fought the deluge of monster that also came with their powers.

Among the young coalition of defenders for the cosmos, Drew gather for a meeting with many other Ultra warriors with Mother and Father of Ultra. They had gathered under the Ultra tower to talk about recent findings, monster they had defeated had strange techno-organic devices within him. Questioning whether there was someone behind it the devices merged to project a dark image of the Alien Baltans, the ones responsible for the alterations to the Plasma Sun the original source of their mutations. As a symbol of dominance to conquer the universe they hoped to put out the flame of the Ultra Tower, the flame created by the founding members of the Coalition and the energy used to create new Ultras.

Drew attack the shadow with his powerful Drew Tornado but hit thin air, as the darkness gathered around him he was saved by a barrier put up by Flare's shadow hands. Eventually Zoffy destroyed the device creating the darkness and the Ultra managed to save the flame of the Ultra Tower.

Years later, Drew found himself on L77 a planet whose humanoid people had also produced Ultras. Drew found himself a loyal knight to the king, Ars. The king went on to father twins, Leo and Astra who they knew may have inherited their father's Ultra powers.

Like the other Ultras in the manga, Drew has his own natural human form. To transform he uses a bracelet with Plasma Ore to transform into his Ultra form, raising it up when he wishes to change and then swinging his arms open as he calls his own name. 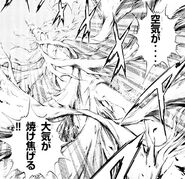 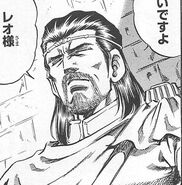