Dreamgillas was a Terrible-Monster who had been terrorizing a young boy named Yukio in his dreams. Even when Yukio was awake, Dreamgillas's presence was left behind when Yukio wet his bed as a result of his nightmares. The sweat stains on his sheets would continuously be outlined in the form of Dreamgillas. Dreamgillas would continue to haunt Yukio in his dreams and thus leave behind his form in Yukio's wet bed for days, with TAC paying little attention due to the Terrible-Monster's little credibility. Finally Yukio decided to daydream instead, which allowed Dreamgillas to escape the dream world and enter the real world instead, where it took up residence in a lake that resembled the one in which he would terrorize Yukio in.

After crashing a jet and a passenger plane, Dreamgillas's presence caught the attention of TAC, who quickly appeared to try and stop the monster. However Dreamgillas's ears and explosive red liquid quickly downed their assaults on the monster. Noticing Yukio with another boy, Dreamgillas brought Yukio's nightmares to life by perusing them. Realizing the children were in trouble, Hokuto transformed into Ultraman Ace to battle the monster. At first it appeared Ace and Dreamgillas's strength were evenly matched, but after Dreamgillas dragged Ace into the lake, the battle turned to Dreamgillas's favor. Realizing Ace was in trouble, Zoffy released a device called the Ultra Magic Ray, that evaporated the entire lake temporarily, allowing Ace to regain an advantage which Ace certainly did. After beating down Dreamgillas, Ultraman Ace destroyed him with the Metalium Beam. 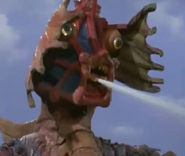 Figure of Dreamgillas, by Marmit 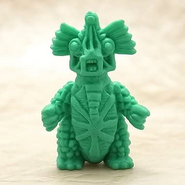 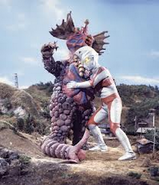