The Dragonic Saucer's purpose was watching humanity's future in progress. The saucer played an important role when it converted Satomi's life force energy to rescue Ultraseven from Dark Nebula. In the finale scene of Ultraseven EVOLUTION episode 5 "Akashic Record", the Disk Dragon appeared to Masaki as the boy spoke to him after a battle against Alien Garut, before disappearing again. 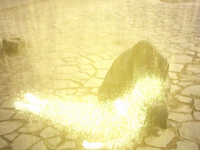 Energy Conversion
Add a photo to this gallery
Retrieved from "https://ultra.fandom.com/wiki/Dragonic_Saucer?oldid=510644"
Community content is available under CC-BY-SA unless otherwise noted.