Protecting the earth and maintaining peace, Ultraman used to be a god-like existence for the Earth, but in recent decades, he disappeared into a mystery... The replacement for him was the elite team Dragon Force, part of the GSB Earth Security Organization. GSB has been receiving reports of global energy anomalies in the near future, and there have been huge disasters around the world. The GSB organization sent the Dragon Force to find out the causes of the energy anomalies, but unexpectedly found that the incident had a relationship with Ultraman... The unexpected encounters between the old and new generations of the Earth's guardians led to the hostile sides of life and death. In the end, is this an accident or a conspiracy, who saw the final truth?

Guangzhou BlueArc was granted the licence and exclusive rights to produce "Ultraman 3D Animation Movies" by long-time Tsuburaya Productions legal opponent UM Corporation, via TIGA Entertainment. BlueArc had decided to produce 6 movies. To start off the movie series, instead of coming up with something new, BlueArc recycled an older Dragon Force movie (simply titled "Dragon Force"), that was initially produced for English and Japanese audiences, but had met little fanfare and was largely unnoticed. With slight edits to the script, and replacing the initial villain's role with "Ultraman", this movie was made.

On July 10, 2017, a press conference was held by BlueArc to promote the movie, where "Ultraman" (Actually a man in shorts, a mask, and a large amount of body paint) appeared along with some of the cast and the director, Tommy Wang. The hideous appearance of Ultraman's "suit", as well as the fact that it was clearly not authorized by Tsuburaya, spawned many negative comments on multiple platforms.

The movie scored 2.6 out of a possible 10 based on 4551 reviews on Douban Movie's review aggregator[2] (As at the time of this page's writing), with many comments expressing their dislike towards Ultraman's inclusion and portrayal in the movie. Trailers on YouTube also received the same comments, calling it a "crappy domestic ripoff". Even Ultraman Dyna star Takeshi Tsuruno, who has previously played (and continues to reprise) the role of Shin Asuka, openly expressed his disgust towards the movie and its promotional material[3], calling out the "fake Ultraman". Dragon Force series creator Kazuya Hatazawa was also disappointed in the movie, and states that he has had nothing to do with its production[4].

This movie was licensed by UM Corporation and TIGA Entertainment who granted Guangzhou BlueArc/Blue Magic Culture Communications Co., Ltd. exclusive rights to produce and distribute "Ultraman 3D Animation Movies" within Mainland China, including Hong Kong, Macau, and Taiwan, for a period of three years, from January 1 2017 until December 31 2019[6]. This was all done without the permission or knowledge of Tsuburaya Productions[7], further fueling the then-ongoing licensing disputes for Ultraman internationally.

Tsuburaya Productions released the following statement regarding the movie:

"On July 10th, 2017, Guangzhou Bluearc Animation Studio, a Chinese corporation based out of Shanghai, China, issued an announcement for their latest production using "Ultraman Series Characters", and entitled "Dragon Force: So Long Ultraman" [Mandarin title: Gāngtiě fēilóng zhī zàijiàn àotèmàn, scheduled for release this October].
Regarding this announcement, we were completely unaware of their production, and the picture was made without our authorization or supervision. Also, use of various Ultraman characters and footage in this presentation/trailer seriously damages the Ultraman brand, so these actions should be resolutely condemned, and likewise deemed as absolutely unacceptable.
Now, vis-à-vis the handling of usage rights concerning the original Ultraman series productions ("Ultra Q", "Ultraman", "Ultra Seven", "Return of Ultraman", "Ultraman Ace" and "Ultraman Taro"), outside of Japan; these long-term disputes are still being pursued in several territories. Regardless, in each and every judgment, so far, we have been persistently declared the legitimate producers of the Ultraman series, and holders of all respective copyrights, therein.
Furthermore, all associated rights to create new productions, such as this aforementioned [Chinese] production, or any modification or adaptation of the Ultraman Series Characters, new or existing, still belongs solely to our company.
Based on the above, we intend to take decisive measures, including vigorous legal action, against the Chinese companies who willfully participated in and made this presentation trailer, and additionally, all parties involved in the production of the picture, itself.
We are deeply remorseful if this situation has been the cause of any concern and/or inconvenience; we also sincerely apologize from the bottom of our hearts to our valued clients, shareholders, and the fans of the Ultraman Series, as we look forward to your continued patronage and support. Thank you for your consideration."

On November 20, 2017, through a Los Angeles court ruling by Judge Andre Birotte Jr, Tsuburaya won the lawsuit against Chaiyo and affiliate groups, which in turn banned the film to be released worldwide.

BlueArc's website mentions that this movie is "Part 1"[8], meaning that they were going to make a movie series out of these characters. However, with the recent court rulings, it can be assumed that the entire project was scrapped, until a live event revealed that a sequels was in production. There is also a trailer dubbed in English, implying that they are trying to bring the movie to an international market[9]. In late September 2018, the sequel movie Dragon Force: Rise of Ultraman was announced for release on January 18, 2019. 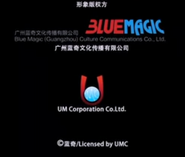 An excerpt from the credits 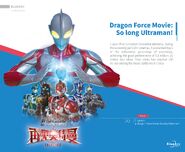