This may not be the article you are looking for. For the officially licensed Marvel Entertainment comic series, see The Rise of Ultraman.

Dragon Force: Rise of Ultraman (钢铁飞龙之奥特曼崛起 Gāng Tiě Fēi Lóng zhī Ào Tè Màn Jué Qǐ) is a crossover movie between the characters of BlueArc Studios' Dragon Force, and Ultraman. It is the sequel to Dragon Force: So Long Ultraman and the second outlawed "Ultraman" movie produced by BlueArc. The entire Dragon Force team, as well as several other assets, have been redesigned and/or revamped as well.

The crisis of Genesis Crystal is imminent, and Evan begins the crazy countdown to ruin the world. Ultraman needs to maximize his abilities in order to stop the Earth from being destroyed. He choses [sic] a little boy as his representative in the world and vanishes soon, leaving a magic cube to encourage him and hope it will help motivate his strong power. Everyone is trying every possible way to open up the magic cube. Dr. J even finds that the little boy's fart is the key to set up a series of laugh-out "fart-induced" experiments to try to figure out the secret.

Though with careful tutor [sic] from Dragon Force elite members and the help of Dr. J's technological weapons, the little boy seems the least possible one to save the Earth. The earth crisis may break out at any moment, Dragon Force is at the end of their resources and the so called "representative of Ultraman" seems like more vulnerable. Who on earth can solve the crisis?[1]

Netizens across the Internet, especially Chinese users who are aware of UMC's involvement in the production of the movie, have made negative comments on social media, even on BlueArc and the movie's official Weibo pages. Despite that, it grossed 10 million Chinese Yuan (USD $1,473,200) in the box office in just three days[2], going up to USD$1,695,159 in its opening weekend. In total, it had made a gross of $5,755,641[3].

The movie scored 3.2 out of a possible 10 based on 2158 reviews on Douban Movie's review aggregator[4] (As at the time of this page's writing).

Despite Tsuburaya's court victory in 2018, BlueArc insisted that their rights to make these movies were legal and authorized by the Chinese government, and that they were going to produce 5 more sequels, with the next coming in 2020.

As shared by the Shanghai Character License Administrative (SCLA) on Weibo[5], Tsuburaya Productions will be taking legal actions against BlueArc for infringement, and released this notice on their website. In response, BlueArc also released this statement accusing Tsuburaya Productions of unlawful competition and harassment, once more citing the 1976 Agreement that had been, in 2018, ruled as invalid in the US court.

"Lightening cool design of robots and weapons, vivid 3D and eye-popping setting of the high-tech future world. The conflict between human beings and aliens. Learn to teamwork with others and achieve personal growth. Dragon Force, as the elite army who is responsible for maintaining peace on the earth and resisting external aggression, received a serious task recently. A farm in the Speed City designed to detain various alien criminals was accidentally hit by a giant meteorite shower and they have escaped without a trace. As the innocent people are at risk of being injured by the alien criminals, Dragon Force shouldered the responsibility of catching the fleeing alien fugitives."

A sequel series to both this movie and the original Dragon Force series, titled Dragon Force 2: Power of Ultraman (钢铁飞龙2之奥特曼力量 Gāng Tiě Fēi Lóng 2 zhī Ào Tè Màn Lì Liàng) started airing on 21 November 2018 in China, and ran for 26 episodes[6]. It features Ultraman, now having regained his powers, fighting alongside the Dragon Force team against aliens, who were previously captured by Ultraman, that have escaped a farm prison as after a meteor shower hits it. Ultraman provides the team with all new mechas, and he himself has new powers, such as a sword and shield and an updated finisher beam[7]. New toys are also being produced for the series.

The show also notably took cues from other popular shows. One such example is one of their monsters bearing a heavy resemblance to Sully from Monsters, Inc.. The Dragon Force's combined robot's finishing move is also charged up in nearly the exact same way as Ultraman Orb's Orb Supreme Calibur.

The series aired a second season titled Dragon Force 2: Dragonsoul Awakened (钢铁飞龙2龙魂觉醒 Gāng Tiě Fēi Lóng 2 Lóng Hún Jué Xǐng) on 11 November 2019, and ran for 26 episodes[8]. There were fewer references to Ultraman and the character himself did not appear, most likely due to a combination of negative press and Tsuburaya Productions' court victories. 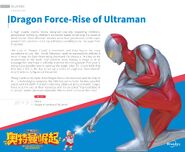 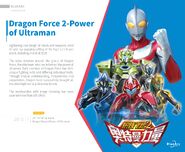