TBA
The Dragon (怪竜 Kai Ryū lit. Monster Dragon) was a Kaiju that appeared in episode 6 of Ultra Q.

After Otohime embarrassed Taro, the boy rode Gameron while chasing the girl who rode a missile. She turned the missile into the Dragon and had it attack Taro. The dragon killed his turtle, Gameron in a single shot and the boy fell into the sea as the dragon vanished and Otohime rescued him. 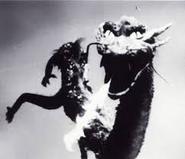