Dragodos was a ruthless killer robot that roamed outer space and slayed other indiscriminately. One day Dragodos tracked and hunted a ship of alien shape shifters that managed to evade him long enough to reach Earth. However, Dragodos found their ship the next day and captured a crew member that imitated Mutsumi just before encountering the Science Guard Party. Once Dragodos turned into his true self, Choichi turned into Ultraman Joneus to fight the mechanical dragon. Despite Joneus being able to destroy the monster's left wing with the Astro Beam, Dragodos over powered the hero and at one point had him coiled with preperations to bisect him. However, the Science Guard Party blasted the monster's tail saw off, causing it to crash into his head and allowed Joneus to finish Dragodos with a shot of the Planium Beam. 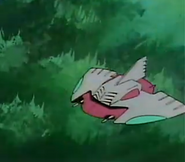 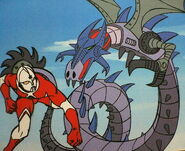 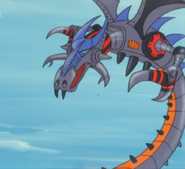