None
Dozilla (ドジラ Dojira) is a Kaiju that first appeared in episode 17 of Iron King.

In an unusual twist, the Phantom Militia sent their next monster to destroy a major highway in Japan. It was speculated that the pair of heroes Gentaro and Goro traveled the highway and their speculation was correct. The mechanical monster wrecked havoc, but Goro quickly summoned Iron King! The colossus challenged the robotic beast and quickly overpowered it, forcing Dozilla into total retreat.

During an altercation with the Phantom Militia, Goro was shot in the leg and put out of commission. The Phantom 12 sensed there was a connection between the giant hero and Goro. In order to test theory, they sent back out the spiky monster Dozilla. Goro could not standby and watch his friend fight on his behalf and transformed. Unfortunately, he was not in full shape and cradled his injured leg, leading the terrorist organization to the truth that Goro and Iron King were one and the same! Iron King was defeated and Goro captured. However, Gentaro managed to damage the beast by throwing a grenade into its cannons, causing it to hastily return to base.

Fresh off a win against Iron King, Dozilla was called upon a third time to fight Goro as he had escaped from his captive prison. Despite the leg injury, Iron King managed to outsmart the robot. He cut off both of its arms, causing one of them to impale its own master! Holding the other with his Iron Belt, Gentaro sent the severed limb flying back at Dozilla. The beast tried to flee, but the pointed weapon stabbed through its back and tore out its front, causing the monolith to instantly explode! 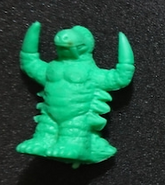