None
Double God (ダブルゴッド Daburu Goddo) is a Kaiju that appeared in the Tsuburaya series, Fireman episode 21.

Dekon and Bokon were the Earth's latest in a recent of invaders, seeking to claim the planet in a solo conquest. Unlike previous aliens, the duo did not bring a monster to fight Fireman, rather, they were the monster. Despite the seeming advantage over previous invaders, they were actually idiotic and bumbling. As their step to conquering the planet, the Dekon decided it'd make sense to start out small by taking over a town first. They became Double God and rampaged the simple town for a bit. This later turned out to be a mistake as it attracted the attention of SAF who, due to Dekon and Bokon's idiocy and ego statistics, quickly discovered the invaders. The two attempted escaping, leading SAF on a rapid goose chase through the town until they were finally cornered. Seeing no other choice, the two activated their coupling devices and fused into Double God! The two began to tear up the town, requiring Misaki to become Fireman and duel the fusion. The combined form of Dekon and Bokon proved a tough opponent in terms of power, but through trickery, the hero managed to outsmart Double God and eventually destroy him with the Fire Flash, ending the ill-prepared invaders lives. 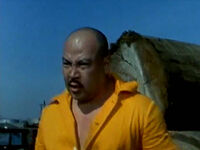 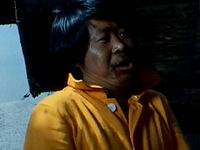 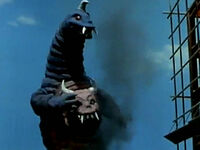 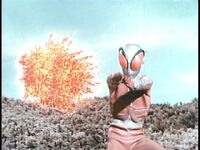 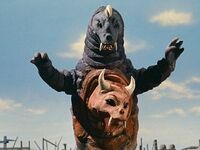 Putting a fire out

Double God behind the scenes 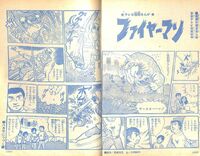 Double God in a manga
Community content is available under CC-BY-SA unless otherwise noted.