The first of the two Dostony units created by the Heller army, Dostony 1 was sent from the base via a teleporter to Earth. However, before the monster could do any damage it was merged with the Scientific Defense Guard's mascot, Monkey.

The second of the two Dostony units created by the Heller army, Dostony 2 was sent from the base via a teleporter to Earth. Upon arriving the robot attacked Monkey-Dostony with the vile robot having the upper hand until both were teleported back to the Heller armybase on Titan.

Upon Dostony 1 arriving on Earth from the Heller base on Titan, the robot found itself merged with the Scientific Defense Guard's mascot, Monkey, and became Monkey-Dostony. To prevent anything serious, a giant cage was used to prevent Monkey from doing anything even though he was docile for the time being. As Pigu tried to convince the others what they were doing was wrong, Dostony 2 showed up and fought the mutant. Both mechanical monsters fought until the teleporter transported them both back to the Heller army base on Titan under Roygar's order.

Upon the Dostonys returning to the Heller army base on Titan they merged into the monster Neo Dostony with Monkey being returned to normal. Neo Dostony was sent back to Earth where it slaughtered a battalion of tanks with ease. Just before Neo Dostony could stomp on Monkey and Pigu, Choichi turned into Ultraman Joneus. Shortly into the fight, Joneus found himself constricted by Neo Dostony's horn tentacles and tail. However, the hero soon managed to break free and soon tossed the monster on the teleporter, impaling it. As Neo Dostony screamed in agony, Joneus finished the beast with a shot of the Planium Ray. 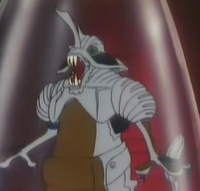 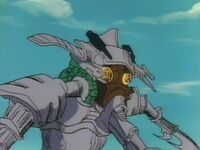 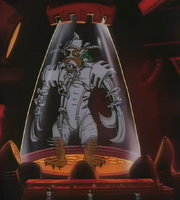 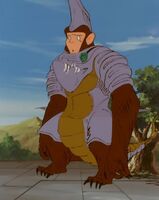 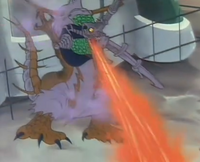