Space Warriors 2000
Dorobon (ドロボン, Dorobon) is a Kaiju that appeared in Ultraman Taro. He appeared in episode 52.

Dorobon was a captive in the Space Prison of Nebula M78 due to him trying to steal the power of the Land of Light to turn the war on his home planet in his favor. While under the patrol of Ultraman Jack, Dorobon escaped and was pursued by Jack, but Dorobon defeated him in the chaos of the chase.

Dorobon landed on Earth and went on a hunt for Taro, wanting to steal his Color Timer. As the sun rose, Dorobon became frustrated by the search, and proceeded on a rampage in a construction site. ZAT attacked, and it was then that the new deputy captain of the team commanded Kotaro and the other members in the Sky Whale to fly closer to Dorobon, and launch missiles at his head. However, Dorobon knocked down the Sky Whale and caught the deputy captain by mistaking him into flying his Sky Condor into Dorobon's lantern. After the ZAT members landed, Kotaro and another member immediately went to assault Dorobon again using the Jackrabbit Car, while the others found the deputy captain. Unfortunately, Dorobon jumped over the car and began chasing after it while spiting flames. Finally, he squished the car flat, and Ultraman Taro appeared. However, Taro was taunted by the deputy captain's plane and was finally forced to retreat.

After Dorobon's victory, he was confronted by Ultraman Jack, who agreed to his requirements for the Color Timer in place for the deputy captain. After Dorobon kept his end of the promise, he ripped Jack's Color Timer off his chest and slapped it on to his. Jack fell and deflated like a balloon. Taro soon reappeared, but was quickly beaten down due to Dorobon now possessing part of Jack's power. Taro began to wait for Dorobon's Color Timer to run out, but was also facing defeat at the same time. Fortunately, the captain of ZAT appeared in another Sky Whale to aid Taro, and soon Dorobon's Color Timer flashed. A short fight later, Taro removed the Color Timer and healed Jack. Soon after that, Dorobon exploded from ZAT fire while Taro takes Jack left to M78.

Dorobon reappeared in the movie The 6 Ultra Brothers vs. The Monster Army.

Awoken by a mad scientist's experiments in Thailand, Dorobon (as well as the monsters: Tyrant, Astromons, and Dustpan) was awoken and went on a rampage until they faced Hanuman. Hanuman withstood against all of the monsters until Gomora appeared and attacked him as well. Hanuman was overpowered by the monsters and encased in a crystal sphere by Gomora until the Ultra Brothers arrived to even the odds. Ultimately, Dorobon battled with Ultraman, leading them both away from the group to beat down the ultra on his own. However, Hanuman arrived and tore the flesh off of Dorobon's face and arms, and then reduced the oni into a skeleton with his Hanu-Hurricane.

Figure of Dorobon, created by Marmit 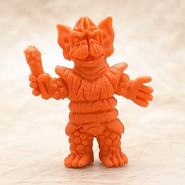 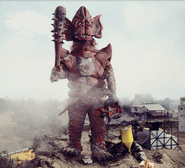 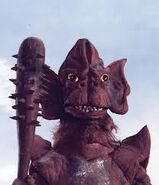 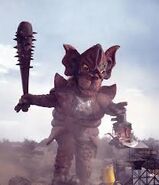 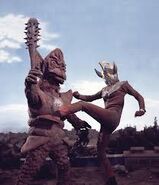 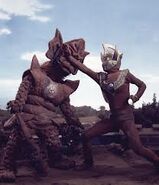 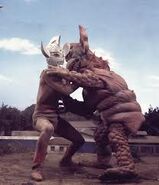