Fireman:
Mirror Fight:
Dorigorus (ドリゴラス Dorigorasu) is a Triceratops-like monster and is the second monster fought by the hero, Fireman.

Dorigorus was a 100 million year old Triceratops that lived in the bottom of the sea with his companion, Dorigon. The two would wake up from their hibernation over a period varying from 1 million to 1 thousand years, and 1973 happened to be the next year they would emerge on. This was done in rhythm with the special plankton they fed upon in the deep sea. A meteor crashed into the water near their home, alongside a space shuttle carrying a special, newly developed rocket fuel which caused the surrounding sea to heat up. This in turn created a population boom of the plankton, which then meant Dorigorus and Dorigon awoke early.

After Dorigon was killed, Dorigorus began to rampage as he searched franctically for her. Dorigorus first attacked a drunken man, striking him with its hand before returning underwater to continue his search. The Ocean Marine group came to investigate and decided to look in the ocean to find the mutant triceratops. Dorigorus was travelling all over the sea floor looking for Dorigon, confusing the Ocean Marine group.

Hours later, Dorigorus emerged from a mountain in search for Dorigon. Dorigorus wreaked havoc as he began rampaging through the surrounding area, causing Daisuke Misaki to transform into Fireman. After an almost evenly matched fight, Fireman used his Fire Jack to break off Dorigorus' horn before ending it with the Fire Flash finisher. These events lead to the foundation of SAF. 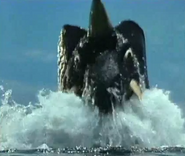 Dorigorus was one of a set of monsters that made a reappearance in the 2012 episodes of Mirror Fight. In this series, Dorigorus was portrayed through use of a stage show suit. 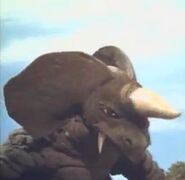 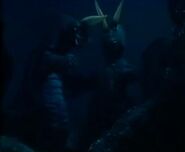