Dorango started out as a radioactive capsule dropped into a lake by the Alien Tran in their saucer. Upon reaching the ground the control device for Dorango was lost and eventually taken by a village boy named Seiji. The next night Seiji used the device, unknowingly waking up Dorango. The next day both Alien Tran mind controlled the local children to find the control device. Seiji took notice of this and proceeded to hide with it in his possession. Seiji used the device to unintentionally break Dorango's capsule by rolling it into a rock on the lake bottom. As the dragon swam to the surface Seiji was quickly caught by the Scientific Attack Force. After an attempt by both Alien Tran to destroy the control device that costed their lives, Dorango went berserk on the nearby village.

As the dragon spewed flames from its mouth, massive destruction was caused followed by attacking the Scientific Attack Force, forcing Misaki to become Fireman. The hero assaulted Dorango's head and neck followed by the monster spewing flames at Fireman which he jumped over. Dorango managed to clamp his fangs on Fireman's left leg and then used his tail to constrict and slam him. When Fireman passed out the Scientific Attack Force commenced an aerial attack to distract Dorango. The cheering children woke Fireman out of his knocked out state, allowing him to use a Fire Flash that ended Dorango upon impact.

Dorango appears in the Redman comic. 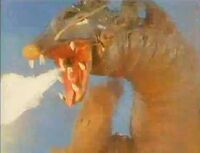 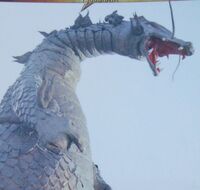 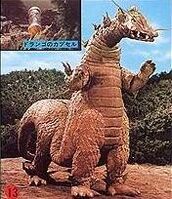