Dorako (ドラコ, Dorako) is a Kaiju that was awakened by the Comet Tsuifon. A revived version of the first, called Re-Dorako, was revived by Geronimon. The first was killed during the scuffle of Red King II and Guigass, and the revived one was killed by the SSSP.

Dorako's design is based off that of a dragon fly, due to the design of his wings. Dorako was originally designed as an insect-like monster with whip-like arms similar to those of Gudon.

Dorako was one of three monsters who was attracted to the effects of a comet that was passing through Earth's atmosphere. He is first encountered by the Science Patrol as he gives chase to them to attack until the Science Patrol trick him into fighting another one of the monsters who was awakened, a Yeti-like monster called Guigass. Dorako and Guigass fought to a stand still with both of them evenly matched until the third monster awakened: Red King. After Dorako ambushed Red King from behind, Red King briefly sided with Guigass and attacked Dorako, tearing off his wings and beating the monster down. Eventually, Dorako succumbed to his injuries and died, leaving Red King and Guigass to fight each other instead. Mystery Comet Tsuifon

Towards the end of the series, Dorako was revived as Re-Dorako (再生 ドラコ Saisei Dorako). Though his wings which had been torn off by Red King II were still missing, Dorako's appearance was largely the same, but he had gained hands instead of the hooks of his initial form, and also received a crown of four horns atop his head. He, along with Telesdon and Pigmon were revived by Geronimon, the Monster Chief, as a warning to humanity of his plans for conquest. However, both Telesdon and Re-Dorako were killed by the Science Patrol before Geronimon could appear himself, while Pigmon was killed by Re-Dorako for distracting him. The Little Hero

Dorako was a bioweapon created by the Alien Baltan. It was first confronted by a Male Red King of the series, but it had little trouble with the monster, slitting his throat and killing him instantly. Ultraman Powered showed up and trying to fight the monster, but Dorako's power was too much for him to handle and defeated Ultraman Powered too and flew away. In the middle of the fight, Dorako made a low-pitch bellow that awakened the Baltans main weapon against Powered. Later that night, Ultraman Powered confronted Dorako again in the heart of Los Angeles and two faced off again. This time Powered was successful in destroying Dorako, but not before Dorako left a gigantic gash on Powered's chest also injuring Ultraman Powered's human host. Falling Stars Spell Trouble

Dorako was owned by an Alien Hook who used him to attack Rei and the Hyuga of the ZAP SPACY. However, Rei summoned Eleking to protect them and after a lengthy battle, Dorako started to gain the upper hand, until Eleking received help from the Space Pendragon as it shot missiles at Dorako. Eleking starting to gain the upper hand, tearing off Dorako's wings and killing him with a power blast of electricity while Rei attacked Dorako's master. Reionics Battle

In episode 10 of the series, Dorako returns as Re-Dorako owned by an Alien Hook (possibly the same one from before). He was sent out to battle a Telesdon that belonged to an Alien Zetton. The two fought fiercely in a battle, but shortly into the fight, both monsters were destroyed by a King Joe Black and their masters were killed by the Reionics Hunter.

In this film, Dorako was partnered up with the monsters Bemstar and Saramandora as their leader, Alien Shaplay ambushed the Ultra Brothers. However, they were met by surprise from Dan's capsule monsters Windom, Miclas, and Agira. Dorako fought Agira. After Rei and Mirai (Ultraman Mebius's host) were rescued, Agira tossed Dorako up in the air and destroyed him by stabbing him with his horn.

Dorako appeared in the second movie special of Ultraman Ginga. He was the tenth monster to be Ultlived by the Livepad and the third monster to be Ultlived by Kenta Watarai. He first did an aerial sneak attack on Telesdon, then the latter slammed his tail against the former, knocking him down, leading into an awesome fight. Both of them did a terrific job fighting against each other, but before Telesdon could finish off Dorako, Dorako vanished. Ultraman Ginga Theater Special: Ultra Monster ☆ Hero Battle Royale!

In the past, Dorako was a monster that bullied Space Cat Mu until X stood up to the monster and it was assumed that X defeated it, leading Mu to fall in love with the Ultra.

Like many monsters from Ultraman and Ultraseven, Dorako appeared in an episode of Chibira-kun. The second stage show suit was used for his appearance in this series.

Dorako reappeared in the series, Redman.

In episode 8, Dorako fought with Redman in a large field. Both fought well until at one point, he pushed Redman onto the floor and stepped on him repeatedly. Redman tried to use the Red Spear, but he was so weak that he dropped it onto the ground. Seeing this, Dorako grabbed the spear and tried to stab Redman with it. Luckily, Redman snatched it back and started stabbing at Dorako's tail with it, killing him.

Dorako reappeared in episode 11 where he ran away from Redman in a field and they both tried to sneak up on each other and/or away from each other but they ended up bumping into each other so they fought each other once more. They had equal footing against each other during the time until Redman summoned his Red Arrow and impaled Dorako on the chest, killing him.

In episode 63, Dorako was running along at a beach. When he saw Redman on top of the cliffs, he teleported up there and then gave the jump on him, resulting in them falling back to the ground. After an evenly matched fight filled with throws, chops, and grapples, the alien hero seemingly began to run and cartwheel away from the monster, but it turns out he just needed space to summon his Red Knife and impale the monster in the chest with it.

Dorako reappeared in episode 66 where he assisted Granadas when he had Redman on the ropes and he let Dorako deal with the hero, but he dispatched him for the moment so he can deal with and finish off Granandas himself. After he did that, Redman summoned his Red Knife and slashed him across his stomach, resulting in his defeat.

In episode 73, Dorako teamed up with Garamon from the start to take on Redman in the desert. Despite being outnumbered, the hero managed to hold his own against both monsters even when at a disadvantage. Redman then defeated both monsters by dragging them by their heads when they were lying flat on the ground and letting them roll down the next hill until they stopped.

Dorako reappeared in episode 77 where he fought Redman once again at a beach. Even when Garamon appeared in the middle of the fight to help the monster, Dorako was no match for the alien hero, even when he seemingly had the upper hand against him. He, along with Garamon, was defeated by Redman when he slammed their heads against each other, killing them in the process.

In episode 78, Dorako grappled with Redman and his Red Arrow and the monster tossed it to Telesdon so that he can use it against him, but the hero managed to throw that thing out of harm's way, and despite having some difficulties in the fight, Redman held his own against both monsters, even when it looked like he was about to lose. The alien hero eventually reclaimed his Red Arrow and drove it through both monsters' mouths, killing them in the process.

Dorako reappeared in episode 128 where he fought Redman alone. At the start of the fight, he jumped at the alien hero and went tumbling down a mountain together. When they got onto solid ground, Redman tried his best to defeat Dorako but the latter had the former on the edge by punching, kicking, and throwing him whenever given the chance. When the alien hero summoned his Red Knife, the monster jumped over him and knocked off the weapon from behind. Afterwards, Redman finally gained the upper hand against Dorako after he endured another beating from the monster and eventually defeated Dorako with a Red Kick to the face.

In episode 132, Dorako teamed up with Zetton II to take on Redman. Together, both monsters managed to even up to Redman while the latter learned from his experiences and used his regular moveset to level the playing field. After a long, evenly matched fight with chops, punches, throws, grapples, kicks, and even sneak attacks, Dorako was eventually defeated by a hard double kick to the neck and Zetton would soon follow.

Dorako reappeared in episode 134, where he teamed up with not only Zetton II once again, but also with Kodaigon and Sadola to take on Redman. All four monsters confused the alien hero by jumping up and teleporting with each other and then teleported back into a horizontal line. Even though all four monsters held the upper hand against the alien hero for the majority of the fight, Redman persevered. In the end, after a long fight, he defeated all four monsters by throwing his Red Arrow at them from the top of a hill and they fell down due to the resulting explosion.

In episode 135, his final appearance on the show, Dorako showed up on the cliffs to help Kodaigon fight Redman. The alien hero threw his Red Knife at him, only to have him catch it and throw it back at him, but the alien hero moved out of the way in time, and it hit Kodaigon instead. The two monsters then had Redman on the ropes with their teamwork and brute strength, but Redman didn't give up. Eventually, Dorako would meet his end when he was stabbed in the chest by the hero's Red Arrow and then kicked into the ground. Kodaigon would soon follow.

Dorako appears in chapter 20 of the manga. He is seen fighting with Colorless in the sky but he is easily overpowered and killed by the Strium Ray.

Dorako reappeared in the puzzle role-playing game for mobile devices, Ultraman Galaxy as a R (Rare) card that you can unlock him in one of the levels in the game with a rare chance of getting Dorako.

Being disintegrated by the Strium Ray 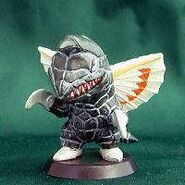 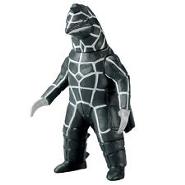 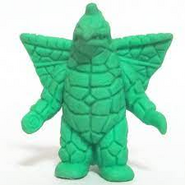 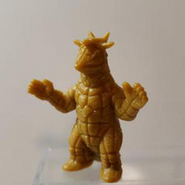 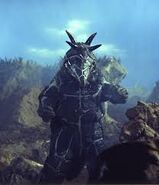 Dorako fighting Redman in the opening to Redman 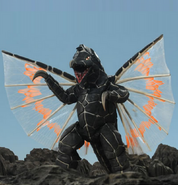 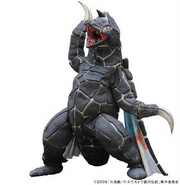