Doragory (ドラゴリー Doragorī)[1] was a moth Terrible-Monster created by Yapool that debuted in episode 7 of Ultraman Ace. It was created by Yapool from combining a moth with a space monster. Renowned for his sheer strength and brutal fighting style, the original Doragory posed a significant challenge for Ace, and could only be defeated by the hero accessing his Ace Blade to slice him to pieces. Since then, numerous other Doragory have appeared in the Ultraman Series, and remain prominent threats for the respective Ultras they fight.

Appearing mysteriously in a forest while Alien Metron Jr. planned to destroy TAC. Doragory made its way towards TAC's HQ, and easily withstood most of TAC's attacks. Hokuto and Minami transformed into Ultraman Ace and fought with the Terrible-Monster while Metron Jr. attacked the main control center of TAC. The fight lasted a long time until Ace used the Ultra Barrier, an attack which took up a lot of energy, but managed to incapacitate Doragory by sending him into another dimension.

Once Metron Jr.'s identity was exposed to the others, Yapool brought Doragory back to Earth to assist Metron Jr., who was revealed to be working alongside Yapool. Minami and Hokuto transformed back into Ultraman Ace again and fought both Doragory and Alien Metron Jr. but was quickly overpowered, Things only worsened when the monster Muruchi II suddenly appeared, joining in on the fray, and attacking Ace as well. Muruchi's appearance, however, did not last long after he accidentally rammed into Doragory angering the Terrible-Monster into viciously killing Muruchi by tearing off his jaw and left leg. Ace resumed attacking Doragory from behind, but it was pointless as Metron Jr. and Doragory soon double-teamed Ace once again. Ace had no choice but to use the Ace Barrier again, sending both Metron Jr. and Doragory to another dimension by splitting in two.

Doragory and Alien Metron Jr. later reappeared to stop a missile that was sent to destroy a meteor that was threatening Earth was nearing its launch. TAC attacked them both until Minami and Hokuto transformed into Ultraman Ace once again. Ace managed to hold both at bay until the missile launched. Ace managed to kill Metron Jr. by slicing him in half with the Vertical Ultra Guillotine, but Doragory remained active, and brutally beat Ace until his Color Timer stopped. Ace fell to the ground, unconscious and near death.

Miraculously, at the same time, the missile finally struck the meteor, blowing it to pieces and ending the threat it posed to Earth. Sunlight struck Ace's head fin, and his power and life was completely restored! Ace started fighting Doragory with ease until he punched a hole straight through Doragory's belly. As the monster cried out in pain, Ace then created the Ace Blade to slice off Doragory's head. He then destroyed the remaining body with his Metalium Beam, ensuring that it stayed dead. Kaiju vs. Terrible-Monster vs. Alien Life of the Sun, Life of Ace

Doragory reappeared in episode 25 of the series Ultraman Mebius.

The second Terrible-Monster to return to Earth, Doragory appeared out of the sky from the same dimension that Vakishim emerged from and instantly began attacking the surrounding area. GUYS quickly flew into action, attacking the monster until Doragory fled back to his dimension without warning. In reality, GUYS learned that this Doragory was the original, revived by Yapool, and was still trying to destroy the missile base from thirty-three years prior. Taking the form of a large moth, Doragory attacked a dimensional expert Professor Fujisawa, the professor who invented a special weapon, entering her body and possessing her in order to destroy the weapon believing it was the original. After failing to destroy it, Doragory left her body and manifested itself into its normal form outside, with Yapool intact. In no time flat, Mirai was able to turn into Ultraman Mebius and the two titans fought hard. Mebius seemed to have the upper hand at first until Doragory managed to knock down Mebius, grabbing his face with his hand. GUYS knew that Doragory was trying to tear Mebius apart like Muruchi II in the past so they knew they had to act fast, and so teamed up with Mebius to attack the Terrible-Monster. Doragory then tried to escape using his dimension breaking powers, but Mebius transformed into Mebius Brave and ultimately destroyed Doragory with the Passi-Blade Attack. The Poisonous Moth's Program

While Rei's Gomora was battling a threatening Verokron, a stray Doragory came onto the scene to assist the other Terrible-Monster by attacking Gomora. Rei summoned Eleking to even the odds for Gomora by having him battle Doragory. As Gomora fought and eventually defeated Verokron, Doragory managed to hold his own against Eleking until Gomora came to assist Eleking. Doragory was no match for the two monsters and was destroyed by Eleking's Discharge Ray.

Doragory reappeared in the movie as one of Ultraman Belial's 100 Monster Army. He was first seen as a spirit in the Monster Graveyard along with King Joe Black, Red King, Telesdon, Alien Babarue, and Arigera. He then teamed up with King Joe Black, Alien Guts, Alien Metron, Gan-Q, Banpira, Eleking, Verokron, King Pandon, Fire Golza, and Nova to take on Ultraseven. In the end, he, alongside Nova, was killed by Belial's Belial Genothunder when he attacked Ultraseven with it.

Doragory appears as one of the Spark Dolls in the series. He is given to Kenta by Alien Valky after an incident with Hikaru, and plans to use Doragory for revenge and to find some of the other Spark Dolls. He is soon come to his senses when punched by his friend and soon discover Jean-Nine, currently in his Jean-Killer form. With no other Spark Doll, he uses Doragory to fight the giant, he gets beaten down pretty easily so he is swapped out for Ultraman Ginga.

It is likely that Doragory returned to space in his original form after Ultraman Ginga defeated Dark Lugiel.

Doragory returned in the second movie special of Ultraman Ginga. He was the third monster to be UltraLived by the Livepad and the first one to be Lived by Kenta Watarai. He immediately went and threw down Zoa Muruchi but Zetton fired his Red Beam at him and Doragory was called out. Ultraman Ginga Theater Special: Ultra Monster ☆ Hero Battle Royale!

Doragory reappeared in episode 10 of Ultraman Ginga S where he was MonsLived by Alien Guts Vorst's clone along with Verokron who was MonsLived by the real deal. Sho transformed into Ultraman Victory to stop them. The Terrible-Monster duo and Victory put up a good fight until Doragory bit Victory, causing the Ultra to bleed. Satisfied with this, the two teleported away. The two then reappeared and began to rampage through the city. With Sho out of commission, Hikaru Raido transformed into Ultraman Ginga to stop them. Although Ginga transformed into Ginga Strium, he and Verokron managed to put him on the ropes. Despite his injury from earlier, Sho re-transformed into Victory to help Ginga. While Doragory was dealing with Ginga, Velokron then fired his missiles at Victory, but Shepherdon appeared at the last minute, protected him, and sent him flying with his Shepherdon Victorium Flash. Verokron then duplicated himself and fired his missiles at the defenseless kaiju, the latter then transforming into a Spark Doll. Both Verokron and Doragory were defeated when Ginga fired his Ginga Spark Lance at them and then Victory slashed them with his new Shepherdon Saber.

Doragory, along with Vakishim and Verokron, was summoned by Yapool to deal with Leo and Astra, who were sent by Ultraman King to stop the reviving Space Emperor on Planet Gua. The Leo Brothers fought them while Victory was fighting Ace Killer and Lunaticks. At first it seemed that Leo and his brother were getting the upper hand until the dimensional distortion expanded and Juda was revived. Finally, Victory, Ace and Ginga arrived to help the Leo Brothers with Yapool likewise assisted his Terrible-Monster, with Leo fighting Vakhishim, Astra fighting Doragory, Ace fighting his sworn enemy Verokron and Ginga and Victory fighting Yapool. Doragory, along with Vakishim, tried to finish off the Leo Brothers with their Lightning Bolts and Angular Missile respectfully, but the brothers dodged the attacks and Astra finished off Doragory with his Astra Kick and Leo finished Vakishim with his Leo Kick.

Doragory appears in episode 8 and his appearance in Ultraman Ace is reviewed by Alien Valky as a reference to his appearance in Ultraman Ginga. Doragory also makes a cameo on New Ultraman Retsuden episode 16 as a Spark Doll in the "Kaiju Theatre" section. He was never given a chance to be on Spark Dolls Theatre until now. In this episode he tells the viewers about the Terrible-Monsters that live on the island and how they lost to Gomora and Eleking. He calls himself the star player in his appearance. After that, Doragoris leaves the cast to do some more basic training starting with running 10 laps. 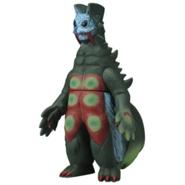 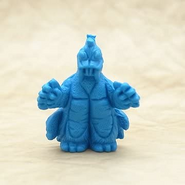 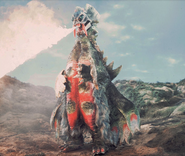 Ultraman Ace Vs. Metron and Doragory. 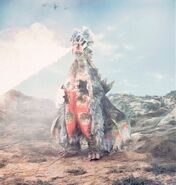 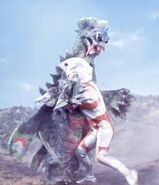 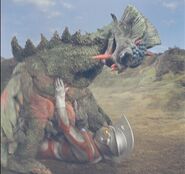 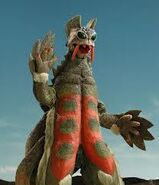 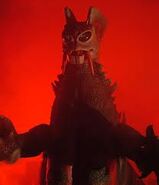 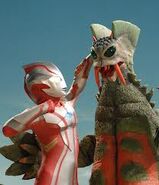 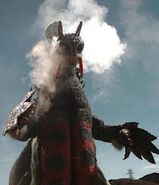 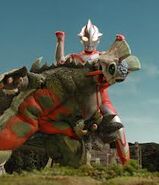 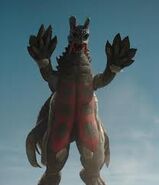 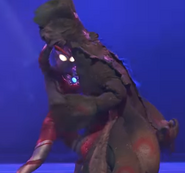