An ancient monster from Japan's past, Don Ron was awoken when Alien Baltan came to Earth to conquer it and assure his species' survival. He was revered as a god, and soon enough he went on the offensive. However, it's actions got SRC's attention. After attacking the monster with their jets failed, they introduced Don Ron to ice mist and after a few seconds, he was completely frozen. As it fell to the side, the Shark Defense System unleashed a barrage of missiles on the frozen fiend. With Don Ron fatally wounded, Baltan emerged from the body and continued the quest on his own, leaving Don Ron in pain. However during in the ending credits, Team SRC carried his body for burial.

Another Don Ron appeared when a few Gloker Pawns attacked Japan and teamed up with the monsters Bolgils, Golmede, and Lidorias to defeat the aliens in response to Musashi/Cosmos defeat under the hands of the invaders and Ultraman Justice. They managed to destroy a few, but the last two combined to form a Gloker Rook and not even their power could withstand such a powerful powerhouse and were forced to retreat. 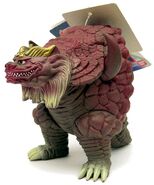