Land of Light in Nebula M78

None
Dokkun (ドックン Dokkun) is a peaceful monster that appeared in the film, Ultraman Story. He is one of the few creatures besides Ultras to live in the Land of Light.

Dokkun was a monster who lived outside of the Land of Light in a canyon. While a young Ultraman Taro was training, Dokkun found the Ultra and laughed at him after the young Ultra failed to do anything threatening towards the monster. As a result, Taro threw Dokkun to the ground in frustration. Dokkun charged Taro until the young Ultra climbed out of Dokkun's reach on the side of the canyon. However, Mother of Ultra arrived on the scene. After Taro and Dokkun apologized to one another for their scuffle, Dokkun left so Taro could train on his own. 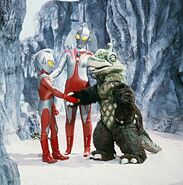 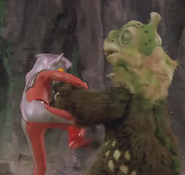 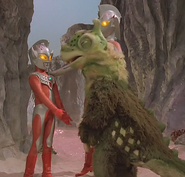