Ultraman episode 12 "Cry of the Mummy"

Dodongo (ドドンゴ, Dodongo) is a monster from the distant past that debuted in episode 12 of Ultraman. The servant and loyal steed of Mummy Man, he emerged following the death of his master, and began to rampage, enraged by his loss and intent on killing the humans who had slain the ancient humanoid. Though Ultraman briefly attempted to spare the monster, he ultimately had to make the decision to kill Dodongo, allowing him to rest in peace.

According to Tohl Narita, Dodongo is based on the Qilin, a legendary creature in East Asian mythology described as resembling a cross between a dragon and a horse, deer or ox. Qilin are said to emerge upon the birth or death of an illustrious ruler, befitting Dodongo's sudden appearance after the death of his master.

In planning stages, Dodongo's design was a skeletal Dimetrodon. This design evolved from Guesra's concept art and would be used as the base for Gavadon's design.

The odd mummy, once unearthed, was studied at a scientific facility. The mummy began to show signs of life, possibly because the scientists then experimented upon it with doses of electricity. However, the mummy showed no signs of re-animating. After most of the scientists had left the facility for the day, the mummy telekinetically activated the switch to bombard itself with more electricity, completing the process of reviving itself. After the mummy attacked several people with electrical bolts that it shot from its eyes, a group of soldiers encircled the mummy and killed it. Once the mummy died, Dodongo somehow sensed that its symbiosis with the mummy was broken. Dodongo erupted from the mountain where his master had remained buried for centuries. He began to chase the workers from the tomb site, he then moved onto a nearby mine, starting to stomp through it in a vengeful rampage. He then unleashed his eye beams upon the area, lighting it aflame. Realizing Dodongo was heading for Tokyo, the Science Patrol decided to attempt to shoot out his eyes, using a new barrier device to protect themselves. Dodongo watched the mine facility burn to the ground but he was then attacked and had one of his eyes shot out, and the barrier device protected the shooter from his beams. However, while he knocked out the one shooting at him, another member shot out his other eye, causing him to blindly rampage through the facility. Soon, Ultraman was called to fight and jumped on Dodongo’s back, riding him. However, he was soon knocked off and the creature tried to trample and ram him, only to be grabbed in a headlock. But the creature fought back, throwing the hero off. Ultraman prepared the Spacium Beam, hesitating for a moment, realizing Dodongo was enraged, both by the death of his master and by the pain of losing both his eyes. However, Dodongo charged him once again, forcing him to fire the Spacium Beam into his chest, finally killing it.

In the year 1800 BC (4,000 years prior to Ultraman Orb), Dodongo was unleashed upon Ishtal Civilizations through a temple and wreaks havoc. Ultraman Orb quickly deals with this monster but upon destruction, Nuru Ra Hotep harvested its Kaiju Card as the key to awaken Magatanothor. 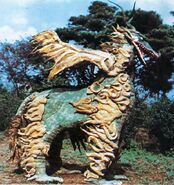 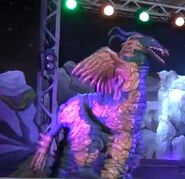 Dodongo as he appears in a stage show

Dodongo seen flying in the background of this Kaiju artwork 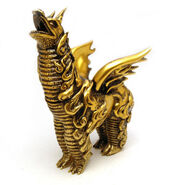 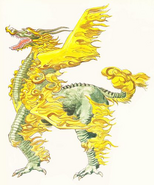 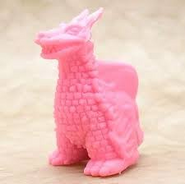