"You let Anti make a kaiju? Why?"
"Because Anti despises Gridman much more than you do."
"Eh?"
"The stronger the hatred, the stronger a Kaiju is born- *screen gets kicked*"

SSSS.GRIDMAN episode 11 "Decisive Battle"
Diriver (ヂリバー Djiribā)[1] is a Kaiju that appears in SSSS.GRIDMAN. It was created by Anti instead of Akane Shinjo.

Eager to fight Gridman, Anti chased Yuta Hibiki down at school, demanding he fight as Gridman. However, he was told that Gridman would come only if there was a Kaiju around. Anti then left and along the way, he got the idea of sneaking into Akane's room and asking Alexis・Kerib to create a Kaiju for him. Alexis accepted the request, saying that Anti's hatred towards Gridman would make a great monster. Shortly after, a lance-like UFO appeared in the sky. Gridman appeared and destroyed the UFO after a short fight but it was able to regenerate itself, giving him some trouble. Combining with Sky Vitter, Sky Gridman flew upwards and found the real body controlling the UFO like a marionette. Anti was standing on its head and transformed. After a brief aerial chase, Diriver was destroyed by Gridman using the Gridknight Saber Slash. Scheme

Diriver, along with all the other Kaiju Gridman fought, reappeared when they were summoned by Alexis to get rid of Gridknight, since Akane refused to make any more new kaiju. Diriver was cut in half by Gridknight, who used the Gridknight Calibur to perform the Knight Calibur End on Diriver. Decisive Battle 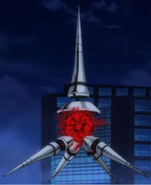 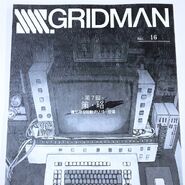