Everything seemed to be going normal at the undersea base of Super GUTS's ocean division until a mysterious red energy bolt destroyed a third of the complex. Super GUTS sent the Japanese division to investigate the situation to make sure it was not the cause of a monster. It did not take long for Super GUTS to find Diplas, the monster responsible, as he was heading for them. The GUTS Marine and Diplas fought each other with neither side gaining the upper hand, forcing Super GUTS to shut off the submarine's lights so the cobra-like sea serpent could not locate them. However, this did not work as Diplas easily found them as GUTS Marine tried to make a run for the surface. When Diplas had the GUTS Marine trapped in a trench, the submarine fired a few laser torpedoes to cause a rock slide onto him, burying him alive. As Super GUTS was executing a rescue mission in the ocean division's base and the shield was reactivated, the ruby on Diplas's antenna sensed it and seemingly awoke him and allowed him to break through the rocks. Shin used the GUTS Marine to distract Diplas as Super GUTS continued rescuing the injured crew and quickly turned into Ultraman Dyna just as the cobra-like sea serpent used an energy bolt on the GUTS Marine. However, after a use of the Solgent Energy Ball on him, Diplas became stronger and knocked out Dyna by constriction even when he went into Strong Type. Diplas went after Super GUTS, only for them to blast his antenna off. Just as Diplas was about to execute a counterattack, Dyna used the Solgent Beam to destroy the cobra-like sea serpent. 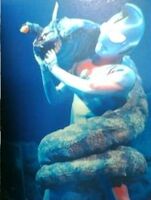 Add a photo to this gallery
Retrieved from "https://ultra.fandom.com/wiki/Diplas?oldid=524642"
Community content is available under CC-BY-SA unless otherwise noted.