Ultraman Dyna episode 41 "I Want to See Our Earth"

Three years prior to the series, Diolius attacked a TPC base that was under construction in Pluto.

Now in 2018, a TPC spaceship Gazelle, was sent to brought several Neo Frontier Jupiter-born children to Earth. Diolius at that time, hanging on an asteroid, detected the Gazelle's signal and made its way to the ship but attacked by its defense system. However, before the monster went away, it had just implanted its larvae on the ship. Super GUTS detected this and to make things worse, if Diolius' egg hatched on Earth, the fluid which came from the egg will vaporize into a poisonous gas that will kill millions of people on Earth in a wide scale. The larvae were released inside the Gazelle and the small insect began to hunt. Normal firepower had no effect and it moved through the halls. When it trapped one of the women and leaped at her, one of the Super GUTS members fired at it, instantly vaporizing it with his laser.

Soon Ultraman Dyna came up to fight the adult Diolius earlier. As the humans inside fended off the tiny larva, Diolius began to drain Dyna’s energy. The hero managed to get free, however, and push the monster back before hitting it with the Solgent Beam, vaporizing the flying creature. 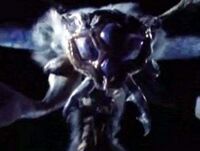 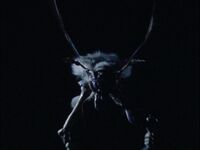 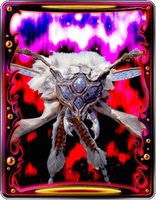