Dinozaur (ディノゾール Dinozōru) is an alien Kaiju that appeared in Ultraman Mebius. It appeared in episodes 1, 5, and 11.

Dinozaurs are a species of pack hunter creatures that travel the universe in search of hydrogen molecules to feed on. In the dark depths of space, one of these terrifying creatures flew through the void, making its way toward Earth. GUYS, the new monster attack team, attacked the monster in space. The creature, known as Dinozaur, easily destroyed their ships with a strange tongue-like cutting beam. It then screeched as it eventually landed on Earth's soil. But the monster soon met resistance, in the form of Ultraman Mebius, the newest Ultra Brother. The two giants engaged in combat, with Dinozaur seemingly having the upper-hand. But the quick Mebius evaded all of his attacks, and returned fire with the Mebium Shoot, which hit Dinozaur's head directly. The beast collapsed, and its eyes went dark, signaling Mebius' first victory. A Fateful Encounter

A second Dinozaur appeared momentarily as it flew to Earth but it was killed before it even got close to Earth by Tsurugi, who wanted revenge against Bogarl for the destruction of his friend and home world, Arb. Reverse Shot

In episode 11 another Dinozaur appeared. After being defeated it somehow survived and became Dinozaur Reverse (ディノゾールリバース Dinozōru Ribāsu).

Some time after the defeat of Bogarl, the GUYS team were suddenly told that an army of Dinozaurs were headed for Earth. Having almost no idea why so many appeared, GUYS decided it was because of Bogarl's death that the Dinozaur's started appearing in space. Luckily, GUYS had many space mines in orbit, which destroyed several of them, and forced the rest of the group to change their course, except for one. GUYS sent out their best aircraft to attack it, managing to use a special weapon that creates two large tornadoes to knock it out of the sky. GUYS then unleashed a barrage of missiles that blew off it's head. The body limped for a second, and fell to the ground. Upon return to their base, they learned that the beast was not dead. Instead, it's body turned upside down, and its two tails both became heads! Thus becoming Dinozaur Reverse. It walked towards the dam for it's water to feed on hydrogen. As GUYS planning an attack, they sent Windom and Gun Phoenix on action but failed when Dinozaur Reverse possess an energy blast on it's back. With Windom retreat, Mebius appeared and fight Dinozaur. With Mebius easily overpowered, Hikari appears and give him a hand. Mebius later tricked both Dinozaur Reverse's head into fighting each other giving an opening for both Ultras to finish the monster. Mother's Miracle

Ultraman Ribut and Poccola were sent to investigate a planet where a lone Dinozaur separated from its pack had been disrupting the natural ecosystem. After receiving intel on the beast from Sora, Ribut engaged Dinozaur, but became quickly overwhelmed by its tongue's range and sharpness. When all hope seemed lost, Poccola stepped in and punched the beast into oblivion. 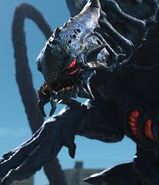 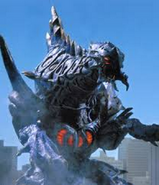 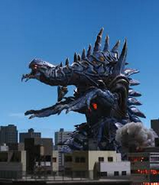 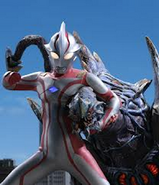 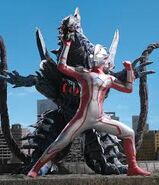 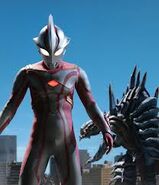 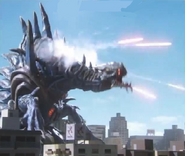 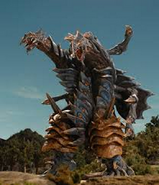 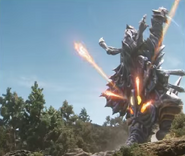 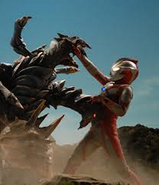 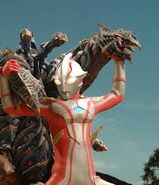 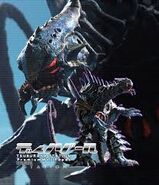 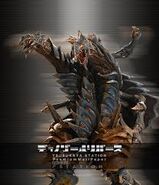 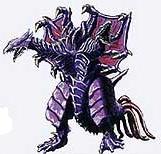