None
The Dinosauroid (ディノサウロイド Dinosauroido) were two humanoid reptiles created by the Naga in Ultraman Tiga. The male was named Adam (アダム Adamu) and the female Eve (イブ Ibu). They were born from forcibly evolved Troodons, and in turn controlled the cyborg Weaponizers.

In the vastness of space there exists a planet inhabited by a race of aliens, the Naga. Arrogant and selfish, this race looked at Earth as their own and created two weapons to deal with the plague of man: the Weaponizers. Burying them both and sending two of their "agents": Dinosaur humanoids Adam and Eve whom they created from the DNA of a dinosaur, down to Earth, who then had the cyborgs uncovered and activated. Years later in the modern era, they defected from their leader after realizing that they were deceived all along and told Daigo/Ultraman Tiga to remove the Neutron Bombs from the Weaponizers. As Tiga did so, the giant also destroyed the Nagas' spaceship. Daigo thanked the duo and asked if they wanted to resume their life as humans, but they declined and departed from Earth. 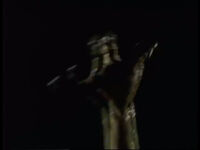 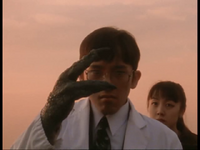 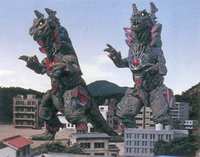 Weaponizers
Add a photo to this gallery
Retrieved from "https://ultra.fandom.com/wiki/Dinosauroid?oldid=510608"
Community content is available under CC-BY-SA unless otherwise noted.