None
Taro (ガルウ Garuu) is a dinosaur-like Kaiju that first appeared in episode 21 of Dinosaur Great War Izenborg.

After Black Maria was destroyed, a single egg was left behind where she fell. The D-Force, seeing the egg as an innocent, moved the object to a safe location. The self-defense forces, however, did not agree with the D-Force's logic and claimed that all dinosaurs were a threat to mankind. The D-Force managed to protect the egg from missile strikes, eventually allowing the infant dinosaur Taro to hatch. The reptile was an instant pop culture hit with children, causing Gottes to become infuriated.

That very day, Gottes arrived on the surface and started to whip the infant and ordered him to attack humanity. The D-Force once again came to the rescue and after some harsh scolding, Taro became docile once more, only for Gottes to attack Taro's foster parents! Gottes egged on the newborn, demanding him to kill his imprinted father, but Taro refused, earning him a harsh crack of Gottes' whip. This was the last straw for the baby, and Taro headbutted Gottes to the ground. But as soon as Gottes got back to his feet, the infant was struck down with another vicious crack of the dinosaur leader's whip, ending the newborn's life. 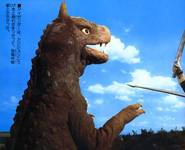