Ultraman Orb Chronicle Chapter 2: 'I am the Galaxy's Migrating Bird' Arc
Dinosaur Tank (恐竜戦車 Kyōryū Sensha) is a Kaiju that appeared in the TV series, Ultraseven. It appeared in episode 28.

A biological weapon created by the Alien Kill. After its masters were killed in action against the UG, Dinosaur Tank was unleashed. Emerging from the side of a mountain, it had the experimental explosive the TDF was working on, in its mouth. Dinosaur Tank attacked the Ultra Guard's testing site by using its laser eyes, knocking two members unconscious and burying Dan alive. Fortunately Dan was able to transform into Ultraseven and managed to rescue the two men from being crushed by Dinosaur Tank. Ultraseven had a hard time fighting Dinosaur Tank after the monster pummeled him with its tail and ran over his left arm. Ultraseven continued to fight back, however, and managed to get ahold of the monster by attacking it from its blind spot; its back. During the fray, Dinosaur Tank dropped the bomb from its mouth, giving Ultraseven the perfect opportunity to stop the weapon. As Ultraseven timed out Dinosaur Tank's returning assault, Ultraseven ignited the bomb with his Shuriken Ray and Dinosaur Tank was destroyed in the bomb's explosion.

Dinosaur Tank was deployed to fight Ultraman Orb after Gai discovered that the meteor Balsas 6, that was apparently about to collide with Planet Cobol, was nothing but a hologram. Upon Dinosaur Tank's defeat, Gai exposed Murnau and Dr. Jiggle but the former escaped, leaving behind a yellow jewel that turns out to be the Element of Earth, which was installed into the Orb Calibur. 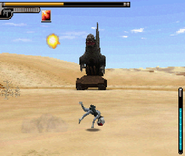 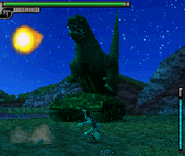 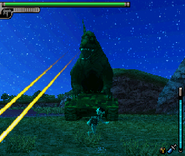 In this short film, a new variant of Dinosaur Tank appeared, under the name Dinosaur Tank Mark II (恐竜戦車マークII Kyōryū Sensha Ma-ku II). Three Alien Hunter teams, one team composed of Alien Babarue, Alien Metron, and Alien Zarab, another composed of Alien Hipporit, Alien Temperor, and Kyrieloid and finally the Rush Hunters participate the battle. With the last team standing is the Rush Hunters, Magna began to attack until he was chased by the monster. Baltan Battler・Barel saves him by surrounding Dino-Tank with his dome, giving Garn and Magna an opening to strike the monster's Plasma Soul. However, with one still remaining, an exhausted Barel destroys the crystal, causing Dino-Tank to fall into a pit and explode, making the Rush Hunters a winner.

Dinosaur Tank (shortened as Dino-Tank) was only released twice by Bandai as a vinyl figure but was released by many other companies as well (not mentioned here). Dino Tank was released originally in the 2000 Ultra Monster Series in a dark brown color with gold highlights (as shown in photo). Later on, Bandai reissued this figure in the 2009 Ultramonster Series using a grey vinyl with dark brown and silver highlights. Both, fortunately, have eyes and teeth painted on. Dino Tank is #43 in the 2009 series.

A Spark Doll of Dino Tank was also released by Bandai, in September 2014. 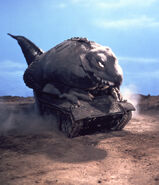