Ultraseven - Planet of the Earthlings

None
Dinosaur (恐竜 Kyōryū) is a dinosaur-like creature created by the Alien Metron siblings. It first appeared in Ultraseven - Planet of the Earthlings.

Created from ancient DNA, Alien Metron gathered the DNA of several extinct species to create this creature. Standing as tall as a skyscraper, the beast soon came into contact with man. The mighty Dinosaur's flesh was tough enough to withstand gun fire, but soon the Ultra Guard dropped a freezing bomb onto it, coating it in ice.

The Dinosaur was immobile, but as night fell, alien lightning fell from the heavens, teleporting the reptilian behemoth away. Days later, as Alien Metron and Ultraseven battled with one another, the alien invader summoned the creature to do his bidding. Teaming up with Alien Metron, the Dinosaur pushed Ultraseven back.

The two killers seemed to have Ultraseven defeated, but as the titan stood on top of the land where the invader's base was buried under, a wall of fire rose up. Destroyed by the Ultra Guard, the Metron base exploded. Stuck in the center of the inferno, the Dinosaur was helpless as its entire body was blown to bits. 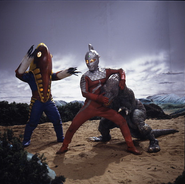 Alien Metron and Dinosaur vs. Ultraseven