This may not be the article you are looking for. For the monster version, see Killer Dinosaurs.

The first appearance of a Dimetrodon would be a hatchling that was protected by the Koseidon Corps against Sigma-1. The individual that hatched was named Jirou, and would come back every once in a while to help the corps. It is believed that Jirou did not become the Killer Dinosaur individual.

When the evil aliens came to Prehistoric Earth, they needed foot soldiers, and what better warriors than Dinosaurs? The Dimetrodon was one of the first to get possessed by the alien mind control. It was killed, unlike the T-rex.

Many other Dimetrodons where seen throughout the series, and during the series finale where a meteor was plumeting to earth, killing all the prehistoric animals. 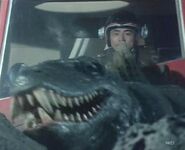 Dimetrodon with a Tyrannosaurus