It was a normal day at Super GUTS's Antarctica division's underwater base until a comet from space landed not far from their location. When repairs to the lower section were being executed, an aggressive and ancient gill-man creature called Digon made itself known and attacked the crew. As the maintenance crew tried to escape more Digons made themselves known and quickly killed them except for one of them that managed to escape just as the base was about to blow up. Super GUTS sent the Japanese division to investigate the situation with another base, the Clarkov NF-3000, as their temporary base and soon received a transmission from the survivor. However, during the rescue operation, the was under attack by some sort of bizarre creature from beneath the ocean and was starting to drag under. The creatures responsible were an ancient creature called Sufume, which worked together with the Digon to bring down humanity for global warming. When the Digon started to raid the Clarkov, Shin turned into Ultraman Dyna to fight them off. While Dyna was fighting off the Digon, Sufume took control of TPC's new orbital station and had it sent on a collision course for Earth. When Dyna went outside to stop Sufume, the aquatic invertebrate summoned Reicubas to do battle with the hero. Things only became worse when the Digon continued their raid of the Clarkov while TPC ordered the destruction of their space station only to be shot down by Reicubas's fire balls. With no other option Super GUTS activated the Clarkov’s self destruct sequence, but Sufume was already aware of the situation and ordered the Digon to stop it. With the ancient gill-men running in at such a constant rate, the strain of the assault of Digon increased on Super GUTS dramatically with each passing moment. However, with Sufume gone it seemed as though the remaining Digon went back to the Antarctic Ocean. The Clarkov Won't Surface! Part 1 The Clarkov Won't Surface! Part 2

Digon reappeared as a member of Phantom Monster Army, where he was shown scaring a couple. Later Super GUTS officers Kohda and Kariya witnessed a Digon walking towards them, though Nakajima see it as a Zenekindarl people instead. As each take out their GUTS Blaster and fired, the fish-like being phased through all of their attacks and vanished. The Power of Thinking of You 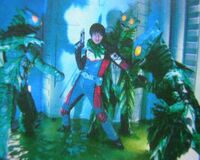 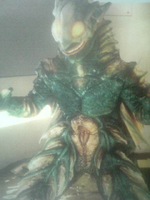 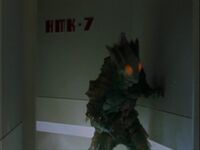 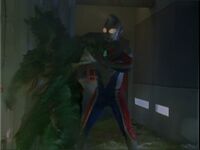 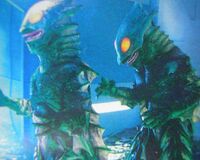 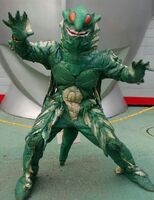 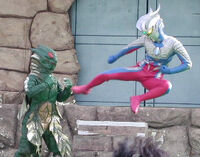 Add a photo to this gallery
Retrieved from "https://ultra.fandom.com/wiki/Digon?oldid=526178"
Community content is available under CC-BY-SA unless otherwise noted.