Diglobe, a meteor-like creature from Jupiter, decided to fly at maximum speed into the unsuspecting planet of Earth. Both XIG and Ultraman Agul were well aware of this and Agul burrowed underground to control the ancient monster, Zonnel. As Zonnel was tearing through a small village Diglobe came very close to Earth and was going to hit a major city. Gamu quickly came up with the idea to use the energy within Zonnel's shell to destroy Diglobe and with no other option available XIG tried it. Gamu turned into Ultraman Gaia to halt Zonnel's progression towards a small town. As the two giants battled out Diglobe came only miles to Earth's surface and would soon collide on impact. Gaia tried to lift Zonnel to use his energy to destroy Diglobe, but the ancient monster was too much to carry. Fujimiya became Agul, pushed Gaia out of the way, knocked out Zonnel in one hit, and opened Zonnel's shell to destroy Diglobe before he crashed into Earth. Gaia created a barrier to protect Tokyo from the blasts aftershock. 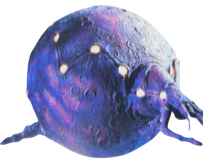