Fireman episode 28 "The Boy That Came From the Planet Argon"

One day Devilsaurus burrowed from up under the ground near a small village. The Scientific Attack Force happened to be there at the time and quickly shot at the monster, forcing it to burrow away. The next day Devilsaurus returned near a cliff, likely attracted by two village men that were harassing Alien Emusa. The monster kicked large rocks, one of them trapped an old fisherman that took in Alien Emusa. Shortly after the Scientific Attack Force arrived, Alien Emusa fused with Bemuta to become Bemusa King. The two monsters provided to fight one another, while Devilsaurus had the upper hand neither of them could put down the other for long until Devilsaurus used his wrist cannons and a throw attack, forcing Bemusa King to unfuse. Fhortly after this the Scientific Attack Force was forced out of the sky by Devilsaurus's wrist cannons. Before the monster could decimate the village Misaki turned into Fireman to save them. The hero quickly overwhelmed Devilsaurus in close combat, eventually destroying the monster's arms with a pair of Fire Shots and finishing him off with the Fire Flash. 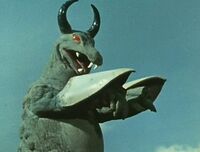 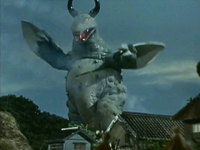