Devilon once caused chaos for the Ruria aliens, using his powers of pyrotechnics and telepathy to attack their planet. In time the Rurian's captured Devilon in a piece of unknown material and thrown into space, with a message inside to prevent it from being released.

A space shuttle was flying between Neptune and Pluto and soon found the strange object dubbed "Snow Art" and was brought back to Japan on exhibit in a museum. Takeshi and Emi were sent there to investigate the object because it was discovered that it was emitting strange sound waves. Hiding until night, Emi uses a special light and shines it which causes Devilon to break out and possess Emi. The now merged creature soon fled through the window. UGM later then discovers the message and it is from one of the Ruria aliens who explains what trouble he will cause and how to get rid of him. Meanwhile, the creature flying a rod of light sets a highway full of cars on fire. In the morning, the monster attacked the streets and used his telepathy to turn people evil and cause havoc.

Another group of people in a open lot were turned evil and attacked a empty car. UGM is sent in when Devilon used it telepathy and turned two of its members evil. For a short time they went back to normal when Takeshi and Itou held on to both of them. The JSDF was sent in and shot at the levitating creature which caused it to grow bigger and starts to attack the city. With everyone fleeing, Takeshi uses the Bright Stick to become Ultraman 80. Before that Devilon used its telepathy and turned the three UGM members evil. At first 80 was in dire straits between Devilon's and UGM's attacks. In time the members were back to normal. In mid battle the monster stops and Emi tells Ultraman 80 to kill her to stop the madness. Instead, he remembers the alien's words and grabs a hold of the monster and allows it to possess 80 and let Emi go. After a struggle 80 gains control of its possessor and flies into space where Devilon separates and is destroyed by Ultraman 80's Succium Beam. 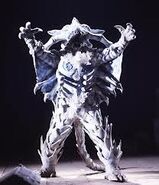 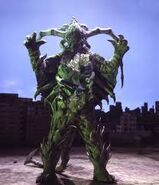 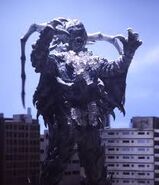 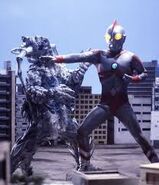 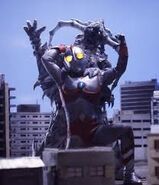 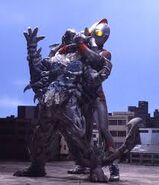 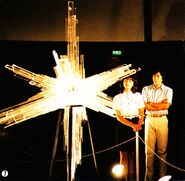 Sealed in a crystal 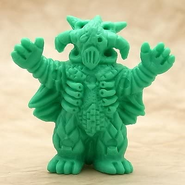