TBA
The Devila (デビラ Debira) are Alien Devil combatants that appeared in Triple Fighter. They do not posses a heart and run on Uranium energy.

Devila were the basic grunts of Demon and the Alien Devil. They are commanded by a Demon Kaijin. When they are given commands by their masters they often mutter "Devila" in response. In fact, in Japanese Archipelago Raiding Strategy, it was shown that the only thing they could say was their own name. They often arrive in Demon Cars. They are weak and are easily defeated in every episode. They could even be beaten by elementary school children like Atsushi Ohtsu.

In episode 10, they were equipped with boxing-glove-like weapons on their hands by Black Killer

In episode 18, they were seen holding a strike, causing Demon to comment that "The Devila are not grateful enough." They were unmotivated and not willing to carry out orders, this was because the Three Revived Phantoms were forcibly extracting energy from them to be able to maintain their coalescenced form, Blooder.

At the end of the series, they are seen teleporting away before Demon destroyed his base.

Cannons
Add a photo to this gallery 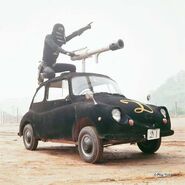 A trio of Devila Cars attacking SAT.
Add a photo to this gallery
Retrieved from "https://ultra.fandom.com/wiki/Devila?oldid=414048"
Community content is available under CC-BY-SA unless otherwise noted.