Exist in various parts of the multiverse
The Devil Splinters (デビルスプリンター Debiru Supurintā) are key items that appear in Ultraman Z. They are small fragments of Ultraman Belial that have spread across the Multiverse.

Due to Ultraman Belial's many battles and subsequent injuries, his body cells went scattered across the multiverse as splinters and plunged it into chaos.[2][3][1] The New Generation Heroes were tasked with tracking down these fragments to prevent any potential problems they could cause.

To combat the rampaging monsters, Hikari crafted the Z Risers and Ultra Medals, but several of these devices were stolen by a Celebro-possessed Genegarg, who proceed to race itself to Earth and was pursued by Ultraman Z.

Celebro had been attempting to use the Devil Splinters to create a Belial Medal, but when they weren't enough, he set his sights on Belial's son to assist him. He succeeded in creating the medal by capturing Riku and extracting the Belial Factor from his genetic material.

While Ultraman Z stayed on Earth to watch over the planet, Ultraman Zero and Ultraman Geed traveled around the cosmos to deal with the remaining Devil Splinters.

Shinya with a Devil Splinter 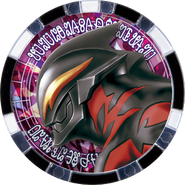 A Belial Kaiju Medal, manufactured via the Devil Splinter and Belial DNA.