Gridman the Hyper Agent episode 36 "A Baby Given A Birth"

None
Devil Phazer (デビルフェイザー Debiru Feizā) appeared in episode 36 of Gridman the Hyper Agent. It was adapted in Superhuman Samurai Syber-Squad as the Stupid Virus.

Takeshi Todo became frustrated with the company of Maps Sakuragaoka, seeing advertisements for it on the TV. Sakuragaoka was a new multi-story shopping center that claimed none could even hope to hack its systems, accounting for all potential intrusions and weaknesses. Takeshi tried various to break through their defenses until he decided to create a new monster to do it for him, whipping up a new thing which Kahn Digifer then brought to life. The newly created Devil Phazer went about its purpose, using its electro-magnetic fire to destroy Sakuragaoka's system defenses before producing to rampage.

Coincidentally around the same time, Yuka Inoue and her pregnant cousin Shinjo Akiho was in a Sakuragaoka elevator, the destroyed systems stopping it and trapping the two. In addition to that, Akiho started to go into labor inside of the elevator, leaving Yuka the only one to help out. Luckily, inside of the systems, Naoto arrived as Gridman accompanied by God Zenon to challenge Devil Phazer. Despite the double teaming, Devil Phazer was constantly on the verge of defeating the duo and overwhelmed them a few times. Eventually Naoto figured out that the monster's chest skull was what made it so powerful, destroying the ornament with Gridman's Spark Beam and weakening the monster severely. The finishing moves were distributed with God Zenon's new God Breaker technique and Gridman's Grid Beam. With Takeshi's latest plot foiled, Yuka and Akiho were rescued from the elevator, the latter having given life to a new child. 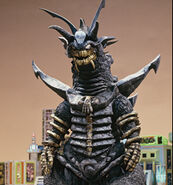